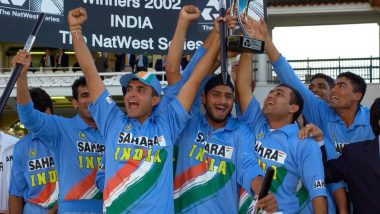 A young Mohammad Kaif running past England captain Nasser Hussain and muttering “not bad for a bus driver eh!” would become a part of cricket folklore. It was on this day 18 years ago that India beat England to win the 2002 NatWest Trophy final, the country’s first major victory after the 1983 World Cup win. Kaif played a heroic innings as did his young partner Yuvraj Singh –two youths still in their 20s, dragging India home with masterful innings after the big guns had faltered. India chased down 326 runs with three deliveries and two wickets in hand to record this memorable win. Sourav Ganguly Sends a Message to Virat Kohli- Led India, Says ‘I Expect You To Win in Australia’.

It was also Sourav Ganguly-led Indian side’s first major trophy win after nine successive final defeats and paved way for a fearless Indian side that learnt to win overseas and conquer bigger and better teams. As India celebrates, the 18th anniversary of that famous win, the twitter account of the International Cricket Council (ICC) revisited the moment and shared some nostalgic pictures from the game. This Day That Year: Mithali Raj Becomes the Highest Run Scorer in Women’s ODIs; ICC Relives the Moment (Watch Video).

#OnThisDay in 2002, India secured a memorable victory over England in the NatWest series final at Lord's.

A brilliant century stand under pressure between Mohammad Kaif and Yuvraj Singh guided their side to a sensational two-wicket win with just three balls to spare 💥 pic.twitter.com/mNNS4jgAWY

“#OnThisDay in 2002, India secured a memorable victory over England in the NatWest series final at Lord's. A brilliant century stand under pressure between Mohammad Kaif and Yuvraj Singh guided their side to a sensational two-wicket win with just three balls to spare,” the tweet from ICC read. It was accompanied by some memorable pictures from that game.

The 2002 NatWest Series final was played at Lord’s. England had won the toss, opted to bat first and helped by centuries from Marcus Trescothick and captain Nasser Hussain piled 325 runs on board. India, in reply, started well and put a century-run opening stand.

But lost five wickets in the space of next 40 runs leaving them tottering at 146/6 when Kaif and Yuvraj joined hands in the middle. Both shared a 121-run stand and took India close but once again the visitors lost three wickets in succession before some fireworks by Kaif and an overthrow took India home.

(The above story first appeared on LatestLY on Jul 13, 2020 12:31 PM IST. For more news and updates on politics, world, sports, entertainment and lifestyle, log on to our website latestly.com).