This Day That Year: Sourav Ganguly Scored a Magnificent Century Against England at Lord’s on Test Debut 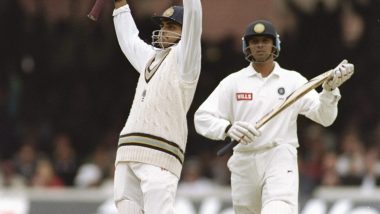 Former India captain Sourav Ganguly made his ODI debut way back in January 1992. The southpaw wasn’t able to make a great impact in his initial years and he had to wait for more than four years to don the Test jersey. Ganguly, alongside another Indian legend Rahul Dravid, made his Test debut against England at the Mecca of Lord’s in 1996. However, he made optimum utilization of the opportunity and played a blistering knock. The left-handed batsman scored a century which was registered on exact this day (June 22) in 1996. Sourav Ganguly, Rahul Dravid Make Test Debut Against England at Lord’s in 1996 (Watch Videos).

Batting first, England piled up a massive score of 344 and were well placed on the driver’s seat. Adding to India’s misery, the likes of Nayan Mongia, Sachin Tendulkar and Mohammad Azharuddin failed to make a significant contribution. However, a rookie Sourav Ganguly didn’t put his guards down and made a fightback. Along with tackling the swinging deliveries to perfection, the batting star smashed the bad balls to boundaries.

On the third day of the game, he reached the three-figure mark and proved his mettle. He finally fell prey to Alan Mullally after scoring 131 runs. Along with Ganguly, another debutant Dravid also played a sensational innings but he was dismissed after scoring 95 runs.

Riding on the efforts of the two youngsters, India mustered 429 runs and the game finally ended in a tie. Ganguly and Dravid went on to become the cornerstones of Indian batting line-ups in all the formats and guided his side to numerous victories. The former announced his retirement in 2011 after scoring 7212 Test runs while Dravid ended his career in 2012 with 13288 Test runs.

(The above story first appeared on LatestLY on Jun 22, 2020 03:46 PM IST. For more news and updates on politics, world, sports, entertainment and lifestyle, log on to our website latestly.com).