Umpiring Blunders in CWC 2019: England's Extra Run in Finals and Other Instances of Poor Umpiring in This Year's World Cup (Check Video, Pics)

The finals of the CWC 2019 seem to have grabbed a lot of attention not only for the rules and results as England have crowned as the winners of the prolific tournament but also a statement by Simon Taufel that had caused ripples. He pointed out an error and said that awarding six runs to England was an umpiring blunder. 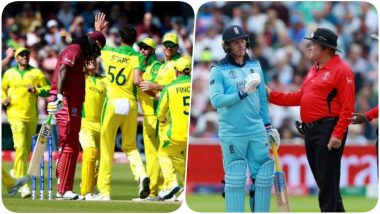 The finals of the CWC 2019 seem to have grabbed a lot of attention not only for the rules and results as England have crowned as the winners of the prolific tournament but also a statement by Simon Taufel that had caused ripples. He pointed out an error and said that awarding six runs to England was an umpiring blunder. While speaking to Fox Sports, he said, “They (England) should have been awarded five runs, not six. It’s a clear mistake. It’s an error of judgment.” He also pointed out to the Rule no 19.8 which spoke about overthrow or willful act of fielder. However, this is not the first time that there have been errors in umpiring.

Nicholls given out by Dhrmsena - reviewed, reversed

Guptill given out by Dharmasena - reviewed, review lst

Williamson given not out by Dharmasena - reviewed, reversed

Taylor given out by Erasmus - no reviews, not out#CWC19Final #ENGvsNZ #dharmasena

Not only in the last over, but at the start of the game itself on three occasions, Kumar Dharamsena and Marais Erasmus came under the scanner for their decisions being overturned. The netizens took to social media and slammed both on-field umpires.

Six fielders outside the circle during India vs New Zealand, Semi-Final 1:

ODI. In the final 10 overs (41–50) a maximum of 5 fielders will be allowed to field outside the 30-yard circle. (Umpire)?blind #Dhoni #indiavsNewzealand pic.twitter.com/uJE0k0xPCN

This happened when MS Dhoni was batting during the third power-play during India vs New Zealand, Semi-final 1. According to the ICC Rule Book, only five fielders are allowed outside the circle. But as per the pictures circulating on the Internet, there were six fielders outside the circle. The netizens slammed poor umpiring standards and angered a lot of fans.

This time Rohit Sharma became the victim of poor umpiring during India vs West Indies, CWC 2019. The Indian opener was adjudged as caught behind and the on-field umpires gave Rohit not-out. West Indies went for a review and the DRS (Decision Review System) reserved the on-field umpire’s decision and gave him out. However, after several replays showed that the ball had not touched the bat. On the following day, even took to social media and reacted to the controversial decision. 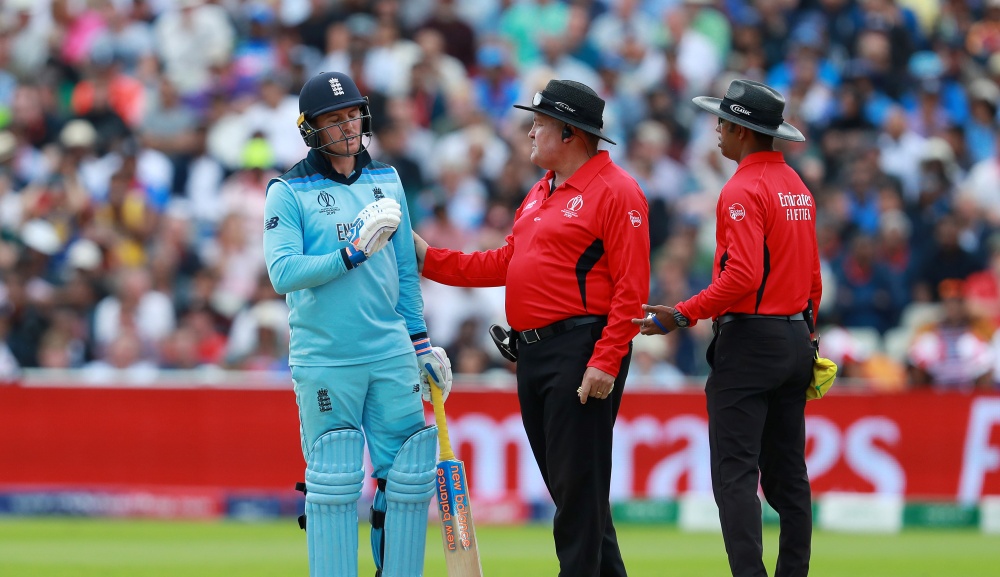 Jason Roy was also subjected to a wrong decision during England vs Australia, CWC 2019 semi-final two. The opener missed his century after he was sent back to the pavilion on the fourth ball of the 20th over. Roy attempted to play the pull shot but missed it and Alex Carey caught that one. Kumar Dharamsena gave him out and was trolled on social media for the blunder.

Chris Gayle out on a no-ball

Chris Gayle was dismissed off a free-hit during West Indies vs Australia, CWC 2019. Several decisions during the match were reversed by the DRS system. After the dismissal of Gayle, Ruchira Palliyaguruge and Chris Gaffaney came under the scanner for poor umpiring. "I don't know if I'll be fined for saying it but I just think that the umpiring was a bit frustrating," Brathwaite told reporters.

On many occasions, one bad umpiring decision has costed the team with a match. We hope that the ICC takes note of these incidents and brings a change in the quality of the umpires for the upcoming editions of the match T20 World Cup next year.

(The above story first appeared on LatestLY on Jul 16, 2019 04:43 PM IST. For more news and updates on politics, world, sports, entertainment and lifestyle, log on to our website latestly.com).