At the Edgbaston Cricket Ground in Birmingham, during the second semi-finals of CWC 2019, the world witnessed poor umpiring standards. This time Jason Roy was the one who was the victim of wrong decision as umpire Kumar DHarmsena adjudged Roy as out when he was not out. 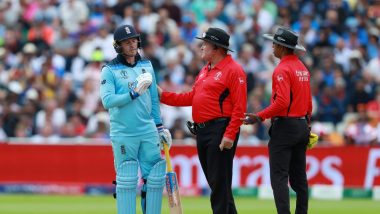 Jason Roy of England reacts after being given out caught behind despite not connecting with the ball, as Umpires, Marais Erasmus and Kumar Dharmasena usher him from the field during the Semi-Final match of the ICC Cricket World Cup 2019 between Australia and England at Edgbaston on July 11, 2019 in Birmingham, England. (Photo Credits: Getty Images)

At the Edgbaston Cricket Ground in Birmingham, during the second semi-finals of CWC 2019, the world witnessed poor umpiring standards. This time Jason Roy was the one who was the victim of wrong decision as umpire Kumar DHarmsena adjudged Roy as out when he was not out. The incident happened during the fourth ball of the 20th over when Pat Cummins was handling the bowling duties for Australia. Cummins bowled short and Roy attempted to play the pull shot. Australia vs England Cricket Score 2nd Semi Final ODI Match.

Alex Carey the wicket-keeper batsman caught that one and appealed for the wicket. Kumar Dharmasena took a few seconds to raise his finger but was given out. Roy was furious, as he knew that he was not out and even argued with the umpires. But the decision of the umpires did not change and even the UltraEdge showed that there was no trace of the ball touching the bat. Needless to say that the netizens were angry and they took to social media to lash out at the poor umpiring standards.

Check out the video of Jason Roy’s wicket first.

Here are a few tweets below:

Wtf is wrong with empire 🤔

Is he high on something ?

How many more blunders from Kumar Dharmasena before he will be known as worst umpire ?

This social media user to Kumar Dharamsena, “Have some shame.”

Kumar Dharmsena if it was an Indian player in place of Jason Roy u were taking ur last breath at this moment.Stupid Umpire don't u have shame idiot umpire.

This netizen seems to be very annoyed.

This is a worst world cup ever. @cricketworldcup @ICC

And worst team ever (Sportsmanship) @cricketcomau

Jason Roy should have been called off for wrong decision but @AaronFinch5 didn't do it.

Talking about the game, Australia won the toss and elected to bat first. The team posted a total of 223 runs on the board. The home team just needs 58 runs to win the game and make its way into the finals of the CWC 2019.

(The above story first appeared on LatestLY on Jul 11, 2019 09:22 PM IST. For more news and updates on politics, world, sports, entertainment and lifestyle, log on to our website latestly.com).