Who Will Captain India if Rohit Sharma is Unavailable? Virat Kohli, Rishabh Pant or Jasprit Bumrah? India Stare at Captaincy Puzzle Ahead of Birmingham Test

With a question mark hanging over skipper Rohit Sharma's availability for the rescheduled fifth Test against England starting at Edgbaston on July 1 as the charismatic batter continues his recovery from Covid-19, India have a captaincy puzzle to contend with ahead of high-stakes contest. 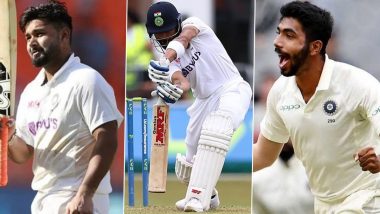 London, June 28 : With a question mark hanging over skipper Rohit Sharma's availability for the rescheduled fifth Test against England starting at Edgbaston on July 1 as the charismatic batter continues his recovery from Covid-19, India have a captaincy puzzle to contend with ahead of high-stakes contest. India lead the five-match Test series 2-1, and a win or even a draw will help them clinch the series, but a loss would certainly not do their morale any good given the busy season ahead and the crucial World Test Championship (WTC) points at stake. Virat Kohli Unlikely To Lead if Rohit Sharma Is Unwell for Rescheduled Test, Says His Childhood Coach.

Sharma had tested positive for Covid-19 during the warm-up game against Leicestershire, missing the second innings of the match. There is hope in the Indian team management that he will recover in time for the Test, but should he fail to do so, India will be in a piquant situation as vice-captain KL Rahul too has been ruled out due to a groin injury. On Monday, India had to fly opener Mayank Agarwal to join the squad in Birmingham as cover for Sharma. While the India squad still has a few members in the side who can step up to fill the void, it remains to be seen how things pan out in the next couple of days.

Among the leading contenders for the role of captain should Sharma continue his process of recovery, is pace bowler Jasprit Bumrah. It will be a historic moment for Indian cricket as the talismanic bowler will become the first quick since the legendary Kapil Dev to lead an Indian Test side after nearly three decades, according to ICC. The 28-year-old Bumrah was earlier named vice-captain during India's tour of South Africa during the ODI series, with KL Rahul leading the side in Sharma's absence. He was also the vice-captain during the Test and T20I series against Sri Lanka, serving as Sharma's deputy.

Captaining the side though will still be a big ask for Bumrah, who has so far played 29 Tests at the international level. He is yet to don the leadership hat for India in any format, and has also not captained a side in the IPL. On the other hand, India wicketkeeper-batter Rishabh Pant is a rising star and is being groomed as a future captain. Having received guidance from none other than former Australia skipper Ricky Ponting in the Indian Premier League and having led Delhi Capitals for two seasons, Pant has enough captaincy experience under his belt to lead the side if the need arises. Graeme Swann Feels Edgbaston Would Suit Ravichandran Ashwin’s Type of Bowling.

He recently captained India in the five-match T20I series at home against South Africa, and while it wasn't the most promising of starts for Pant, as India drew 2-2 with the final match being washed out, the side did claw back from a 0-2 deficit to end the series on level terms. Pant's aggressive instincts could come in handy as a leader against England, and it remains to be seen whether the team management is keen to task him with the responsibility in the high-profile fifth Test. While former skipper Virat Kohli has an outside chance of being asked to lead the side, but given the fact that it was under him that India took the 2-1 lead against England last year, it would be befitting for him to complete the unfinished task.

Kohli gave up the captaincy in the longest format after a 2-1 series loss in South Africa. But there is no questioning his credentials as a leader. Under him, India scaled the peak of Test cricket, becoming the No.1 ranked side in the world and reaching the final of the World Test Championship, losing to New Zealand. Kohli is India's most successful captain in the longest format, with India winning 40 out of the 68 matches under his leadership -- a win percentage of 58.82, according to ICC. Whether Kohli remains keen on donning the captaincy role again remains to be seen.

(The above story first appeared on LatestLY on Jun 28, 2022 11:57 AM IST. For more news and updates on politics, world, sports, entertainment and lifestyle, log on to our website latestly.com).