West Indies skipper Jason Holder won the toss and elected to field first in the West Indies vs New Zealand, match no 29 of CWC 2019. 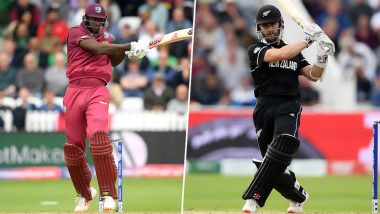 New Zealand will aim to continue their winning streak when they face West Indies in match no 29 of ICC Cricket World Cup 2019. The game at Old Trafford, Manchester is a do-or-die encounter for Jason Holder's men, while another win for New Zealand will see them assured of a semi-final berth. New Zealand are on a four-match winning streak. West Indies, in contrast, has lost all of their last four matches after showing lots of promise in their dominating win over Pakistan in the opening encounter. West Indies skipper Jason Holder has won the toss and elected to field first. Star all-rounder Andre Russell after hobbling and limping through the last two matches has finally been rested. Carlos Braithwaite will replace him the playing XI, Ashley Nurse for Darren Bravo and Kemar Roach for Shanon Gabriel are all part of the three changes they made. New Zealand has gone with the same team. West Indies vs New Zealand Cricket Score 29th ODI Match.

Kane Williamson's class century under pressure against South Africa, which led New Zealand to a victory in their previous game, will give the Black Caps enough confidence as they walk into this fixture. They already have won four games out of five matches, while a fifth game against India was washed-out. They also have a great chance of climbing to the top of the points standings if they manage to overcome the West Indies. West Indies vs New Zealand Live Cricket Score of ICC World Cup 2019 ODI Match.

Jason Holder's men have been the biggest benefactors from Sri Lanka's upset of England on Friday. Not only has Sri Lanka's 20-run victory opened up the semi-final run of the 2019 World Cup, but has also given teams in the bottom half of the points table a slim hope. The Caribbean boys will also want to recall spirits from Headingley, Leeds where they smashed a full-strength New Zealand bowling attack for 421 runs. West Indies went on to win the match by 91 runs after bundling 330 runs. It was an all-round performance from the West Indies at Leeds a month ago and they will hope the same happens in Manchester.

Take a look at the Playing XI of both teams:

New Zealand are second in the points table with nine from points from five matches, while West Indies from the same number of games, has only three points. Both teams have endured one abandoned game.

(The above story first appeared on LatestLY on Jun 22, 2019 05:37 PM IST. For more news and updates on politics, world, sports, entertainment and lifestyle, log on to our website latestly.com).