Australian all-rounder Daniel Sams has said that he doesn't regret missing out on his side's white-ball tour to the West Indies, as he was finding life inside the bio-bubble tough to handle. 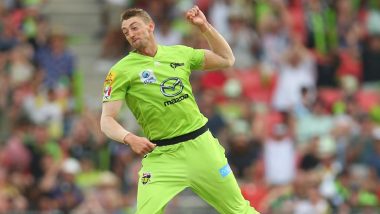 Sydney, July 16: Australian all-rounder Daniel Sams has said that he doesn't regret missing out on his side's white-ball tour to the West Indies, as he was finding life inside the bio-bubble tough to handle.

Sams withdrew from the tour of the Caribbean after spending time in bio-bubbles for Australia, New South Wales, Sydney Thunder in the Big Bash League (BBL) and Royal Challengers Bangalore (RCB) in the Indian Premier League (IPL).

Having tested positive for COVID-19 in isolation before the IPL began in April, Sams had to spend more days in quarantine till he tested negative. But after the IPL was suspended in May, Sams along with other Australians was forced to stay in Maldives as there was a flight ban from India. After 14 days in Maldives, he spent another two weeks in quarantine in Australia before reuniting with his wife, Danii.

"I don't have any regrets. Obviously, I've had thoughts of, 'I wish I was there' but in the end I made the decision that's best for me long-term. My relationship with Danii is the most important thing and one of the biggest reasons of me pulling out was so I can connect back in with Danii because we haven't been apart for that long ever," said Sams to cricket.com.au on Thursday.

The all-rounder further explained that concerns about mental wellbeing played a role in his staying back at home. "So that (family) was definitely a priority, and my mental health as well. Basically, I made the decision to come home so I can be good long-term, where potentially if I went (to the Caribbean) I'd be no good for the summer, for potential World Cup chances, for BBL, for other stuff. Obviously, I'd love to be over there but I think it was the best decision for me and my family."

Sams made his T20I debut against India and has played four matches till date. He is still unsure of how players can cope with life in lengthy bio-bubbles.

"It's definitely something that we're not so much going to have to get comfortable with, but get used to and then figure out plans and ways to manage yourself. If that means you're going to have to take some time off, then you have to take some time off, or if it means you need to work with someone constantly. That's something I've been thinking about and I'm wanting to put some things in place -- and I'm not quite sure what it's going to look like yet -- but to be able to manage myself while in those bubbles," said Sams.

(The above story first appeared on LatestLY on Jul 16, 2021 03:36 PM IST. For more news and updates on politics, world, sports, entertainment and lifestyle, log on to our website latestly.com).