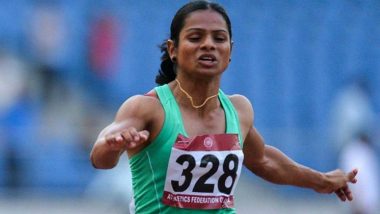 It was quite a disappointing day for the Indian athletes at the Tokyo Olympics 2020. First, it was Avinash Sable who could not qualify for the next round and then MP Jabir also failed to qualify for the next round. The day continued t be disappointing for the Indians as Dutee Chand has missed out on a spot in the semi-finals in  Women's 100 Meter Heat 5. The Indian athlete finished seventh out of eight athletes. With this, it was curtains on her  Women's 100 Meter Heat 5 journey at the Tokyo Olympics 2020. Shelly Ann Fraser-Pryce was the won who walked away with a win. 2020 Tokyo Olympics Live Updates Day 7.

With Hima Das being out of Tokyo Olympics 2020 due to an injury, all hopes were pinned on Dutee Chand. The Indian athlete clocked the timing of 11.54 seconds in the 100-meter race.  She secured the seventh spot out of eight athletes who contested alongside her. Surely this was just not enough to put her to the next round.

Here's the video of the race:

Shelly Ann Fraser-Pryce clocked the timing of 10.84s seconds to walk away with the win. Meanwhile, Indian boxer Lovlina Borgohain has assured us with the second medal as she secured a berth in the semis.

(The above story first appeared on LatestLY on Jul 30, 2021 09:33 AM IST. For more news and updates on politics, world, sports, entertainment and lifestyle, log on to our website latestly.com).