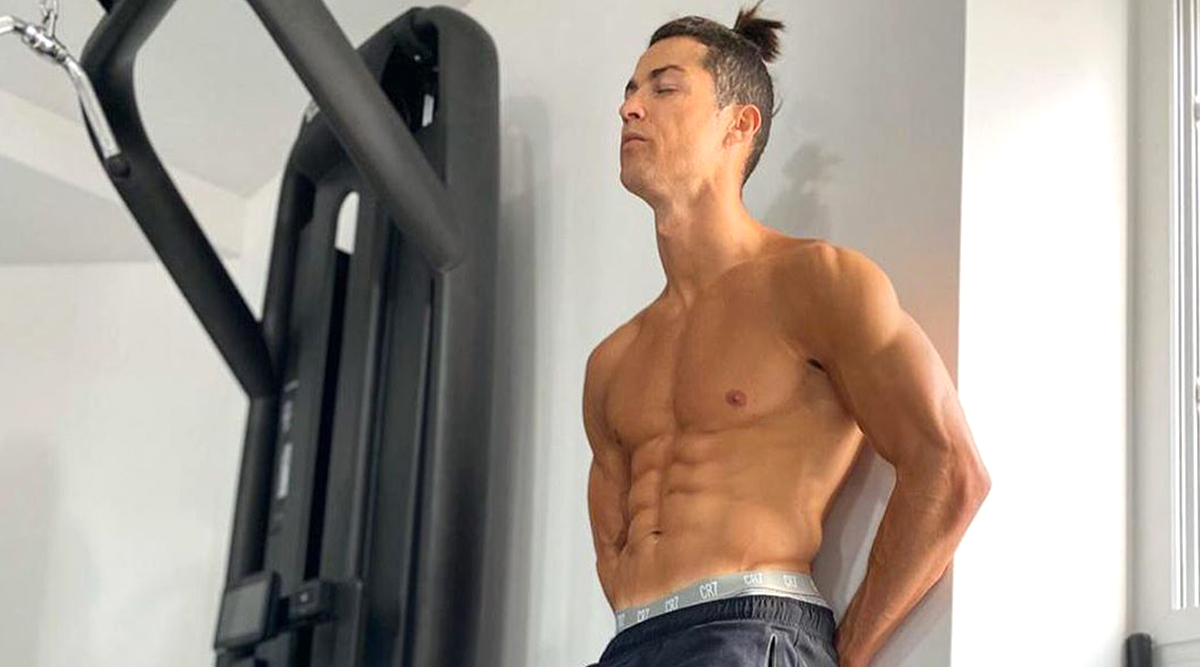 Cristiano Ronaldo may be off the football field due to the global coronavirus outbreak which has forced major sporting events into suspension and compelled people to stay at home. But the Portuguese and Juventus superstar has not let the pandemic affect his exercise drills. Despite being at home and maintaining quarantine, the 35-year-old has been very meticulously following his training schedule to keep himself fit and ready for when football resumes. Ronaldo had also kept his fans updated about his daily activities through pictures and posts on his social media handles. Cristiano Ronaldo Flaunts his Abs During Self-Quarantine, Poses for a Photo With his Sisters.

In his latest post on Instagram, Ronaldo can be seen flaunting his muscular body and his abs. “Breathe in, breathe out. Stay active,” the Juventus talisman captioned a picture in which he can be seen standing beside an exercising machine. Ronaldo was perhaps relaxing after his exercise session. In the picture, he is leaning against a wall and relaxing with his eyes closed. Liverpool Keeper Alisson Becker Emulates Iconic Cristiano Ronaldo Celebration After Attempting an Insane Throw (Watch Video).

Earlier, the Juventus forward had posted pictures of himself exercising. Play inside, play for the world,” the Portuguese sensation had said in the photo, in which he could be seen working on his legs. Ronaldo has regularly urged his fans and people worldwide to stay at home and not step outside amid the pandemic outbreak. Take a look at some other pictures of Ronaldo where he can be seen flaunting his abs or exercising.

Ronaldo had also joined hands with agent Jorge Mendes to fund intensive care units (ICU) in two hospitals in Portugal while he also funded hospital beds in two facilities in Lisbon. The Portuguese sensation has been in self-isolation with his family in his native hometown Madeira, Portugal. He had initially visited to see and take care of his mother, who was rushed to a hospital in critical condition after suffering a stroke.