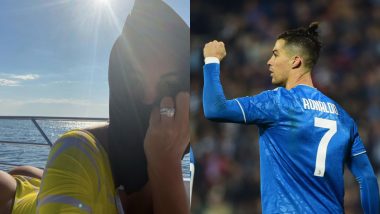 Juventus star Cristiano Ronaldo’s girlfriend Georgina Rodriguez flashed a ring in her latest Instagram post, thus giving rise to speculations that the duo got engaged. Ronaldo is in Italy along with Georgina as Italian Serie A resumed on June 23. The footballer was spotted holidaying with his girlfriend in the seaside city of Viareggio. Meanwhile, Georgina took to Instagram and posted her picture in which she was flashing a ring on her ‘wedding finger’. Cristiano Ronaldo Poses in a Colourful Attire Following Juventus' 4–0 Victory Against Leece in Serie A 2019–20 (See Instagram Post).

However, the footballer’s girlfriend’s post did not mention anything regarding engagement in her post caption. “Grande es aquel que para brillar no necesita apagar la luz de otros (Great is the one who does not need to turn off the light of others to shine),” she wrote in the caption. Cristiano Ronaldo, Gianluigi Buffon Feature in Juventus' Latest Instagram Post As Football Club Wishes Fans on the Occasion of National Sunglasses Day 2020.

This is not the first time Georgina was seen wearing a ring on her ‘wedding finger’. During the FIFA Football World Cup 2018 in Russia, she was spotted flashing a ring on her wedding finger. Back then, it gave rise to speculation as well that the duo is engaged. However, early last year, Georgina cleared the air and said she and Ronaldo are not engaged. However, she had hinted about the engagement in future “Every couple wants to get married, and I would love to personally. Right now we have priorities and a lot of responsibilities, although in the future it would be marvellous to become Cristiano’s wife,” she was quoted as saying by The Sun back then.

(The above story first appeared on LatestLY on Jun 29, 2020 12:45 AM IST. For more news and updates on politics, world, sports, entertainment and lifestyle, log on to our website latestly.com).