Juventus footballer Cristiano Ronaldo is currently in Singapore attending to support the Singapore Olympic Foundation-Peter Lim Scholarship. He also attended many private functions and one of them was his visit at Yumin Primary School where he got a roaring reception. 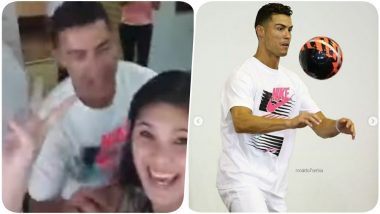 Juventus footballer Cristiano Ronaldo is currently in Singapore attending to support the Singapore Olympic Foundation-Peter Lim Scholarship. He also attended many private functions and one of them was his visit at Yumin Primary School where he got a roaring reception. Needless to say that the kids and the teachers were quite happy with the arrival of the former Manchester United forward. One of the teachers of Yumin School got photobombed by CR7 and was obviously on cloud nine after the moment. Cristiano Ronaldo Reportedly Tipped €20,000 to Greek Hotel Staff to Keep Paparazzi Away from Family.

So here’s exactly what happened. The school teacher who is apparently the Juventus football star was recording a selfie video and CR7 was on his way to the stage. The teacher obviously wanted to capture herself with the football star and kept the video rolling. Noticing the act, Cristiano Ronaldo walked up to her and photobombed the video. He playfully shook the teacher from her shoulders and as soon as this happened, she jumped with joy and was screaming.

Ronaldo also interacted with the school kids and posed for pictures with them. He even flaunted his deft ball-control skills.

Ronaldo is in Singapore 🇸🇬

What a day at the boys' primary school! To see @cristiano in person is really amazing, even for me. A legend indeed. Thanks to Mr Peter Lim for bringing the G.O.A.T. to Tampines and to YuMin Primary School. #cr7 #cristianoronaldo #yuminprimaryschool

While interacting with the kids, he also had a message for them. He told them not to give up on oneself and work hard. “It was tough for me at the start of my career. I missed my home, I missed my family, and I cried many times,” he said during a question-and-answer session with the event host. But with the help of my family, my teammates, I never gave up and kept working hard for my dream. So I say to all of you, keep working hard and never give up” he further added. CR7 attributed his success to his mother, four kids and his Georgina Rodríguez.

(The above story first appeared on LatestLY on Jul 04, 2019 05:10 PM IST. For more news and updates on politics, world, sports, entertainment and lifestyle, log on to our website latestly.com).