Cristiano Ronaldo is back to Juventus and has been prepping up for the game against Sampdoria which will be held on September 21, 2020, at the home ground of the Old Lady. Ahead of the Serie A 2020-21 fixture Cristiano Ronaldo has returned to the squad and has been sweating it out with team Juventus. The team was seen sweating it out in the nets and the official account of the team shared the snaps on their social media accounts. 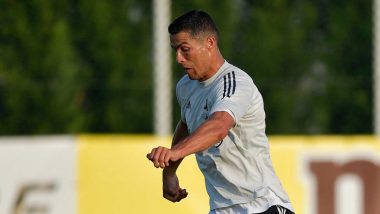 Ahead of the starts of the season, the team played a practice game against Novara where the team won the match 5-0. Ronaldo was the first one to score a goal at the 20th minute of the match and this was quite a warning to their opponents. Juventus had won the Serie A 2019-20 title and thus the fans want the team to replicate the same for the upcoming season as well. Now, let's have a look at the pictures shared by Juventus.

The last time Cristiano Ronaldo played against Sampdoria was when he scored an amazing header where he challenged gravity. The goal is touted to be one of the best nets by the five-time Ballon d'Or winner.

(The above story first appeared on LatestLY on Sep 16, 2020 09:11 PM IST. For more news and updates on politics, world, sports, entertainment and lifestyle, log on to our website latestly.com).