Cristiano Ronaldo Fires Warning to Opponents Ahead of Serie A 2020-21, Scores a Goal During Juventus vs Novara, Friendly Game (Watch Video) 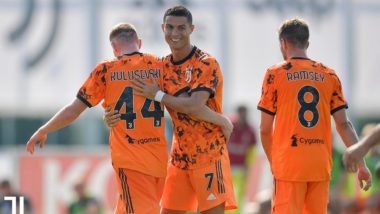 Cristiano Ronaldo has fired a warning to his opponent ahead of Serie A 2020-21 as he scored a goal in the pre-season friendly against Novara. By half-time, CR7’s Juventus was 1-0 in the match held at the Juventus Training Centre. Ronaldo has been in sublime form ever since the start of the year. Throughout the year so far, the five-time Ballon d’Or winner has added feathers to his dazzling hat by scripting records one after the other. The friendly tie featured names like Ronaldo, Aaron Ramsey, Juan Cuadrado, Arthur Melo, Gigi Buffon and others. At the time of going online, Juventus was on 2-0 as Merih Demiral netted another goal at the 56th minute of the match. Cristiano Ronaldo Nets His 100th International Goal, Twitter Reacts (Watch Goal Video Highlights).

Paulo Dybala was nowhere to be spotted in the fixture. Juventus shared the video of their goal on social media and the fans could not keep calm as Ronaldo scored the goal. Needless to say that this was no less than a warning to the Serie A teams. The five-time Ballon d'Or winner scored a goal at the 20th minute of the match. Now, let's have a look at the playing XI of team Juventus and the goal scored by CR7.

Recently, CR7 scored a brace for Portugal in the UEFA Nations League 2020 and scored his 100th international goal for his country. He led Portugal to a 2-0 win against Sweden.

(The above story first appeared on LatestLY on Sep 13, 2020 03:41 PM IST. For more news and updates on politics, world, sports, entertainment and lifestyle, log on to our website latestly.com).