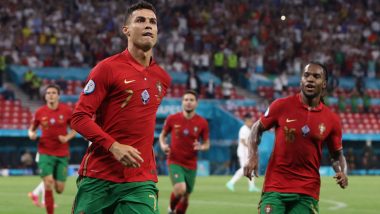 Portugal might have gotten knocked off from the Euro 2020, but Cristiano Ronaldo is still on his way to win the Golden Boot honour this year. The Portugal star's team got eliminated from the Euro 2020 in the Round of 16 itself after they lost to Belgium. But when it comes to chasing the Golden Boot honour, Ronaldo still leads the buck. Patrik Schick from the Czech Republic team scored a goal against Denmark but now has been knocked out of the league. Harry Kane's Brace Helps England Book a Berth in Semi-Finals of Euro 2020, Thrashes Ukraine 4-0 (Watch Goal Highlights).

Schick has scored the same number of goals as Cristiano Ronaldo, but the Portugal captain will still walk away with the honour because of the assist he had. Karin Benzema, Emil Forsberg and Romelu Lukaku stand on three four and five respectively All the three players have four goals in their kitty. Now, let's have a look at the full list below:

Out of these players, Raheem Sterling and Kasper Dolberg from Denmark can actually challenge Ronaldo for the record. Both England and Denmark have qualified for the semifinals of Euro 2020. Harry Kane whose name features on number 12 of the list could also surpass Ronaldo. Kane had scored a goal against Ukraine as England won the match 4-0.

(The above story first appeared on LatestLY on Jul 04, 2021 01:17 PM IST. For more news and updates on politics, world, sports, entertainment and lifestyle, log on to our website latestly.com).