With each passing day, the buzz of Cristiano Ronaldo joining Juventus is getting thicker and thicker. 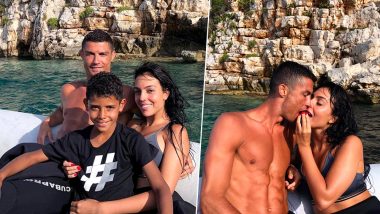 With each passing day, the buzz of Cristiano Ronaldo joining Juventus is getting thicker and thicker. Amidst these speculations, CR7 is busy vacationing with his girlfriend Georgina Rodriguez and his son Cristiano Ronaldo Jr in Greece. Ronaldo who led Portugal in 2018 FIFA World Cup is seen letting his hair down after their exit from the mega event. The team failed to qualify for the quarterfinals after losing against Uruguay by 2-1.

CR7 shared a picture of himself where the striker is seen sailing in a boat with Georgina and his son Cristiano Ronaldo Jr. The family is all smiles as they enjoy their vacation. The former Manchester United player shared the video with the caption, “❤️”

Georgina too shared a couple of pictures of their vacation. In the first picture, she is seen sharing a snack with Ronaldo and she captioned the snap, “Summer vibes.”

The family was seen soaking in the sun on the beach.

Here’s is another picture of Ronaldo having a peaceful time with his family.

Talking about Ronaldo’s stint at the World Cup, he scored 6 goals at the mega event. However, he could not score against Uruguay. It was Edinson Cavani who drafted the ouster of the team by scoring a couple of goals. After losing against Uruguay, Portugal coach Fernando Santos couldn’t come to terms with the result. “It's not a fair result, we did enough for another result. Uruguay scored with their first shot on our goal. We are very sad but that's football," he said while addressing the press.

(The above story first appeared on LatestLY on Jul 10, 2018 12:35 PM IST. For more news and updates on politics, world, sports, entertainment and lifestyle, log on to our website latestly.com).