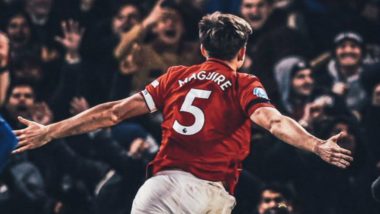 Manchester, July 30: Former Manchester United defender Gary Pallister has showered praise on current captain and centre-back Harry Maguire, saying his presence at the back is reassuring. England's Maguire didn't miss a single minute of his maiden league campaign at Old Trafford and became the first outfield player to achieve such an accolade since Pallister in the 1994/95 season. "I think he's (Maguire) terrific," Pallister said during the latest episode of MUTV Group Chat on manutd.com, the club's official website.

"I think he's rightly got the captaincy; he's one of the talkers. "He's not the type of leader that Bryan Robson, Steve Bruce and Roy Keane were, but I think he's got an assurance about him that the players respond to. Manchester United Finally Begins Training at Old Trafford; Jesse Lingard, Harry Maguire, Fred Rodrigues & Others React! (Watch Video & See Pics).

"I think, for his first season, he's been terrific. He's comfortable on the ball, you saw it on Sunday (at Leicester City), getting his head to things when the balls are chucked into the box. He's dominant there and he's exactly the type of centre-back that Manchester United needed."

He also spoke about Maguire's defensive partner, Victor Lindelof. "Lindelof has had a really good season as well," Gary suggested. "He's not as dominant as Harry, but I think he's complimented him.

"He's got the hang of the Premier League: the physicality and the pace of it. I think he went from strength to strength." Manchester United finished third in the Premier League and will be part of the Champions League next season.

(The above story first appeared on LatestLY on Jul 30, 2020 08:53 PM IST. For more news and updates on politics, world, sports, entertainment and lifestyle, log on to our website latestly.com).