Lionel Messi Set To Lead PSG Attack Against Lorient in Neymar and Kylian Mbappe’s Absence; Will He Finally Be Able To Recreate His Magic in Ligue 1 2021–22?

The Argentine star would be grabbing all the attention on Thursday as he would be the leader of PSG's attack against Lorient in the absence of Kylian Mbappe and Neymar. A big question arises- 'Will he be able to finally recreate some of his Barcelona magic?" 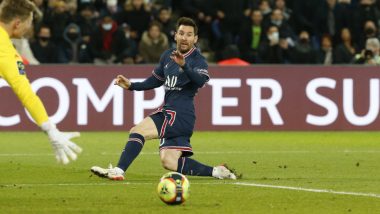 Lionel Messi would find himself in a rather unfamiliar territory this season as he is set to lead the PSG attack on his own against Lorient in a Ligue 1 clash on Thursday. The Argentine was used to doing this (winning matches all by himself) back when he was in Barcelona, something that won him a record seven Ballon d'Or titles. But he is somehow yet to reproduce his magic for PSG this season. With Neymar out with injury and in-form Kylian Mbappe missing due to a suspension, the question is, will Messi be able to lead the attack on his own and add to his Ligue 1 goalscoring tally? For the record, he has five Champions League goals for PSG and just one in Ligue 1. Lionel Messi’s Numbers Have Been Incredible, if You Argue, You Don’t Know Anything About Football, Says PSG Sporting Director Leonardo

This match against Lorient would be a true test to Messi for his new club PSG. All this while, the star of attack has been the young Mbappe, who has continued to impress fans and critics alike by consistently scoring goals and winning matches for his team. He has scored 15 goals so far. Of course, there has been a lot of speculation about the young Frenchman's future for the club but that has not deterred the World Cup winner from performing.

Now, it is time for Messi to finally be the star player he is known to be and lead his team from the front with his heroics. This match can be a testament to determining many things about the Argentine's PSG career. A good performance, something that the football world resonates Messi with, can shut all detractors who claim that the Copa America 2021 winner has not settled in well at PSG. On the other hand, a disappointing show might enhance those doubts, something that ardent PSG and Messi fans would not want their star player to go through. Messi would have someone of Icardi's stature as a partner in attack but he would, for sure, have all the limelight.

(The above story first appeared on LatestLY on Dec 22, 2021 09:28 PM IST. For more news and updates on politics, world, sports, entertainment and lifestyle, log on to our website latestly.com).