Messi's move to PSG last summer proved to be a promising one but it has not turned out the way he or the fans would have expected. The Argentine has managed just eight goals this season across all competitions. He still has 13 assists in Ligue 1, one short of teammate Kylian Mbappe. 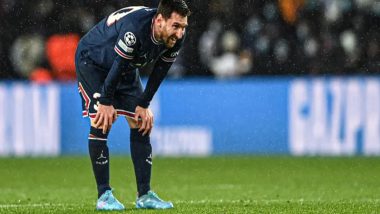 Lionel Messi is set to stay at PSG next season despite rumours linking him with making a Barcelona return. The PSG star has had a forgettable season so far despite PSG closing in on a Ligue 1 title. The Argentine had moved from Barcelona to PSG after talks for a new contract broke down. But ever since arriving in Paris, the Argentine star has failed to recreate the form he had at Barcelona, something that won him seven Ballon d'Or titles--the most by a player so far. Dani Alves Urges Lionel Messi To Make Barcelona Comeback, Says, 'It’s Time To Return Home if He Wants'

Messi was recently rumoured to be eyeing a return to Barcelona and all of it gained a lot of fuel when president Joan Laporta said that he is not ruling out the move. But according to a latest report in the Mundo Deportivo, the star forward will remain at PSG next season. Messi, who had joined PSG on a two-year deal last year,  has failed to light up Ligue 1 with his performance, scoring only eight goals so far. He, however, has managed to notch up 13 assists in the French top-flight competition, one short of teammate Kylian Mbappe.

The Argentine was signed by PSG with the club hoping to form a destructive trio with him, Neymar and Mbappe and win the Champions League. But that was not to be with the French giants crashing out of the competition following a defeat to Real Madrid in the round of 16 stage. PSG are also reportedly trying their best to have Mbappe sign a new deal with the Frenchman reportedly close to a move to Real Madrid.

(The above story first appeared on LatestLY on Apr 21, 2022 04:29 PM IST. For more news and updates on politics, world, sports, entertainment and lifestyle, log on to our website latestly.com).