Lionel Messi’s £26M Hotel in Barcelona Set To Be Demolished As per Court Orders: Report

The Argentine star was reportedly unavailable for comment when asked about this issue. The four-star hotel is set to be demolished as it does not comply with the city's standards. 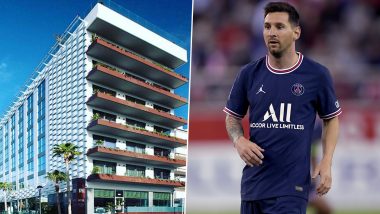 Over the moon with a record seventh Ballon d'Or title, Lionel Messi might not feel too good about this piece of news from Spain. According to reports, his hotel, which is valued at £26m, has received a court order to be demolished. The PSG star's hotel, as per reports from El Confidencial, a Spanish outlet, the four-star hotel named 'MiM Sitges’, which has a total of 77 rooms has been ordered by the court to be demolished since it does not meet the city's standards. The balconies are reportedly too big as per the city's standards and building codes. Lionel Messi’s ‘Struggles’ at PSG Revealed by Former Barcelona Teammate and Friend Luis Suarez

Messi, who owns hotels in Ibiza and Majorca with the Majestic Hotel Group, spent £26m on the Hotel MiM Sitges, which sits just over 100 feet from the sea, back in 2017.The hotel boasts 77 bedrooms, costs around £105-per-night during high season to stay in a standard room. pic.twitter.com/RmNgRz81wM

It has also been learnt that Messi's hotel also does not have proper services pertaining to handling fire emergencies. But it does have a rooftop bar from where visitors can get a clear and beautiful view of the city of Barcelona. Also, further reports claim that 80% of the materials used for making this hotel either has been reused or can be recycled in the future. But unfortunately, it is going to be reportedly demolished soon.

(The above story first appeared on LatestLY on Dec 06, 2021 11:18 PM IST. For more news and updates on politics, world, sports, entertainment and lifestyle, log on to our website latestly.com).