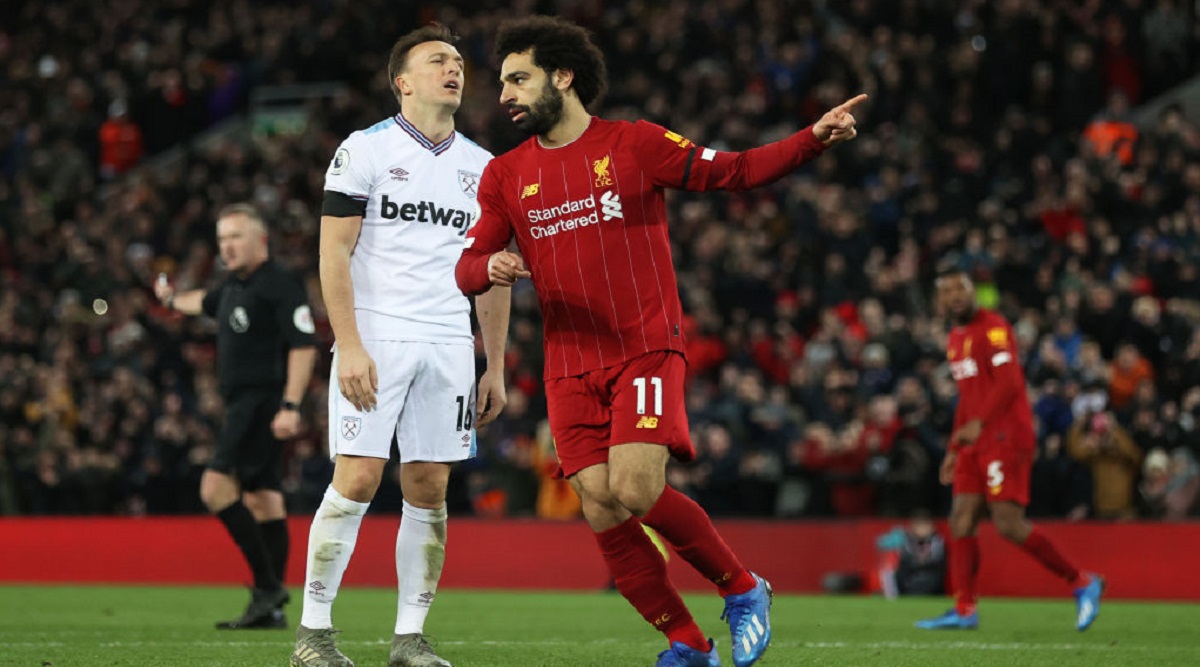 Liverpool, February 25: Liverpool earned a record-equalling 18th consecutive Premier League win as the runaway leaders came from behind to beat West Ham 3-2 thanks to Sadio Mane's late strike on Monday. Jurgen Klopp's side were in danger of dropping Premier League points for the first time since their draw at Manchester United on October 20 after falling behind in the second half at Anfield. Georginio Wijnaldum put Liverpool ahead early on but Issa Diop equalised soon after.

"I never thought it would be broken or equalled. We did it and I cannot believe it happened to be honest," Klopp said of the record. "Whatever will happen this season is an effort of all of us. So far, so good." Their 21st successive league victory at Anfield also equalled their own English top-flight record for consecutive home wins, set by Bill Shankly's team between January and December 1972.

Liverpool need four victories from their final 11 games to guarantee a first English title since 1990. They are unbeaten in their last 44 league matches, just five short of Arsenal's all-time English record of 49. "You see City playing and this is the team in world football that are able to win all their other games. We have to keep winning," Klopp said.

"It is not about shining but the hardest work. As long as the boys are ready to work hard I am not concerned." Klopp's men found themselves in the rare position of coming off a defeat, for only the third time in all competitions this season, after Tuesday's 1-0 Champions League last 16 first leg loss at Atletico Madrid.

And third bottom West Ham gave them all they could handle in a thrilling clash that suggested Liverpool are not invincible just yet as they try to emulate Arsenal's unbeaten 2003-04 top-flight campaign.

'You Have to Squeeze It'

"We scored a wonderful first goal. But then we weren't good in second ball situations. We lost a little bit of patience," Klopp said. "You have to squeeze it and that's what we did to get the three points. It is so special." Liverpool took the lead in the ninth minute when Trent Alexander-Arnold showed great agility to whip a cross from an acute angle into the six-yard box, where Wijnaldum stooped to head past Fabianski's weak attempted save.

The Reds had kept a clean-sheet in 10 of their last 11 league matches, but they were guilty of switching off for once as West Ham grabbed the equaliser three minutes later. Robert Snodgrass's corner curled towards Diop and the defender rose higher than Joe Gomez to beat slow to react Liverpool keeper Alisson Becker with a powerful header.

Having turned the title race into a procession, there was a distinct lack of edge about Liverpool, who were also hampered by the absence of their tireless captain Jordan Henderson due to a hamstring injury. Sensing an unexpected opportunity, West Ham mounted an incisive raid that brought them an improbable lead in the 54th minute.

Mark Noble found Declan Rice on the right and he quickly swivelled to whip in a cross that substitute Fornals swept home from eight yards. That was the signal for Liverpool to finally wake from their slumber. Liverpool's pressure was rewarded in the 68th minute with a huge helping hand from Fabianski as Salah's shot from Andy Robertson's cross somehow squirmed through his legs into the net.

West Ham were unable to stem the tide and when Alexander-Arnold shot goalwards in the 81st minute, Mane tapped into the empty net to give the Reds another landmark moment in an incredible season.