The picture of Sadio Mane’s broken iPhone 11 first appeared on December 27, 2019 hours before Liverpool’s crunch match against Leicester City in the Premier League. Liverpool thrashed the title challengers 4-0 with Mane even registering an assist but it was his phone that grabbed the headlines. The iPhone appeared to have cracked at the top half of the screen. 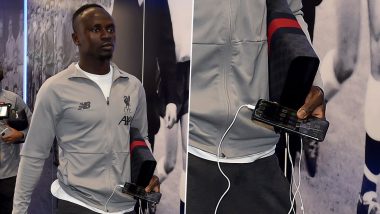 Fans were left shocked when Liverpool star Sadio Mane’s broken iPhone 11 appeared online before the Premier League leaders’ match against Leicester City last week. Quite surprising a news it was for a footballer, who commands £11.5million a year. Mane is a fan favourite at Anfield having guided the club to a UEFA Champions League title, the FIFA Club World Cup and the UEFA Super Cup last year. Fans soon were obsessed with the news and calls for getting Mane a new iPhone screen guard started trending on the internet. It was, however, Mane’s response to this news that left many a little baffled and more proud. Mane, 27, revealed reasons for carrying the broken and disfigured iPhone11 winning more hearts on the internet. Sadio Mane Beats Mo Salah to Be Crowned Africa's 2019 Men's Player of the Year.

The picture of Mane’s broken iPhone 11 first appeared on December 27, 2019 hours before Liverpool’s crunch match against Leicester City in the Premier League. Liverpool thrashed the title challengers 4-0 with Mane even registering an assist but it was his phone that grabbed the headlines. The iPhone appeared to have cracked at the top half of the screen.

Many fans even tweeted in support of themselves buying Sadio Mane a new iPhone screen guard. But as it turned out, Mane had valid reasons to not buy a new screen guard for his disfigured iPhone and use it in the same stage as long as it lasts.

Get Mane a New Screen Protector

“Why would I want ten Ferraris, 20 diamond watches and two jet planes?” What would that do for the world?” the player had said in an interview with TeleDakar in October last year opening up for the first time on his humble and modest lifestyle. I starved, I worked in the fields, I played barefoot, and I didn’t go to school. Now I can help people,” added the Senegalese winger. You would understand there why buying a new iPhone or changing the broken screen guard will never be his priorities.

“I prefer to build schools and give poor people food or clothing. I have built schools [and] a stadium; we provide clothes, shoes, and food for people in extreme poverty. I give 70 euros (approx. US$78) per month to all people from a very poor Senegalese region in order to contribute to their family economy. I do not need to display luxury cars, luxury homes, trips, and even planes,” Mane said. “I prefer that my people receive a little of what life has given me.”

As it turned out the iPhone Mane was carrying wasn’t even purchased by himself but was a gift by one of Liverpool teammates. He revealed in the same interview that the iPhone 11 was gifted to him by club teammate Georginio Wijnaldum in October. Mane had even taken to Instagram to share a picture of his friend and thanked him for the gift. Interestingly, it was the same phone – with a broken screen guard that Mane was carrying ahead of the Leicester fixture.

The 27-year-old recently was awarded the African men’s cricketer of the Year with the Senegalese beating teammate Mo Salah and to the award. He is first Senegalese player ever to win the prestigious trophy.

(The above story first appeared on LatestLY on Jan 10, 2020 02:22 PM IST. For more news and updates on politics, world, sports, entertainment and lifestyle, log on to our website latestly.com).