Antoine Griezmann is currently at Atletico Madrid on a loan deal. He is still a Barcelona player and United must negotiate with the Catalan outfit if they want to continue their approach to rope in the elite striker. 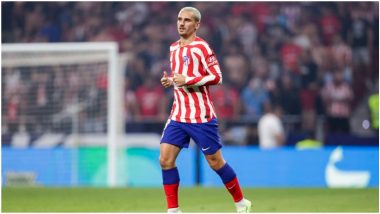 Manchester United have shown their interest to sign Antoine Griezmann from Atletico Madrid in the winter transfer window. According to The Athletic, the Premier League club wanted to get the French forward during the summer window but failed to do so due to issues in the player's contract. However, United have reignited their pursuit of the former Barcelona attacker as they want to bolster their attacking front amidst rumours of Cristiano Ronaldo's possible departure in January.

Antoine Griezmann is currently at Atletico Madrid on a loan deal. He is still a Barcelona player and United must negotiate with the Catalan outfit if they want to continue their approach to rope in the elite striker. According to a report from The Athletic, United are set to start talks with Griezmann's agent for a potential January move. The Red Devils have secured the signing of Antony from Ajax a day before the summer window shut down. He is currently thriving alongside Ronaldo and Jadon Sancho in the front. Cristiano Ronaldo Poses With His Manchester United Teammates During a Training Session (See Pic)

However, the future of CR7 at Old Trafford remains doubtful with the player pushing for a desperate move away from the Premier League club. The 37-year-old was linked with plenty of clubs like Chelsea and Bayern Munich despite United's 'not for sale' stance. The Portuguese forward is reportedly unhappy at Manchester due to lack of UEFA Champions League as United missed out on the top European competition due to sixth-place finish last season in the Premier League. However, it remains to be seen whether United really go all the way to rope in Griezmann who has started to find rhythm in La Liga.

(The above story first appeared on LatestLY on Sep 19, 2022 10:15 PM IST. For more news and updates on politics, world, sports, entertainment and lifestyle, log on to our website latestly.com).