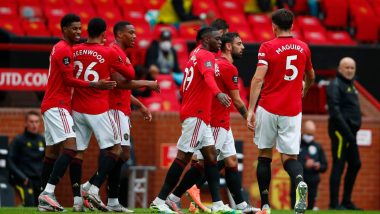 Manchester United and Lask will take on each other at the Old Trafford for the second leg of Europa League 2019-20. In this article, we bring to you the predicted line-ups of the two teams but before that let's have a look at the preview of the game. As mentioned above the match will be held at the Old Trafford. As of now, the Red Devils are 5-0 up. The Red Devils have played more games against Austrian sides without defeat in all European competitions than they have against teams from any other nation. The team has won seven games and one of them have ended with a draw. Jose Mourinho Takes a Dig At Manchester United’s Bruno Fernandes For the Number of Penalties Taken During Premier League 2019-20.

Manchester United has scored  22 goals and has conceded just one. “Jesse Lingard will be starting tomorrow, but the team won't be too different to the last time we played LASK away in March,” said the Ole Gunnar Solskjear, the manager of Manchester United. The last time the Red Devils reached the quarterfinals of the Europa League, they won the tournament in 2016-17. Bruno Fernandes who has been crowned as the Premier League player of the Month for June 2020, is currently the joint top scorer in the Europa League right now with six goals – one for United, five for Sporting FC.

The visitors go to the Old Trafford with only a couple of injuries. Dominik Thalhammer and winger Thomas Goiginger and left-back Marvin Potzmann. Now let's have a look at the predicted line-ups of the squads below:

(The above story first appeared on LatestLY on Aug 05, 2020 01:23 PM IST. For more news and updates on politics, world, sports, entertainment and lifestyle, log on to our website latestly.com).