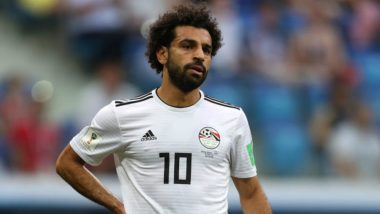 Liverpool’s Mohamed Salah has slammed Egyptian Football Association for the country’s disaster in the 2018 FIFA World Cup, Russia. Egypt failed to qualify for the Round of 16 and was at the bottom of the Group A table with 0 points. The team lost all the three matches in the preliminary round. Salah blamed Egyptian Football Association and said that there were way too many celebrities into the team hotel. Mohamed Salah meets Chechen leader Ramzan Kadyrov

“I asked for more security for all players, not only for me,” Salah said. “We had many disturbances at the team’s camp during our participation at the World Cup in Russia. I couldn’t go to the restaurant twice as they told me you won’t be able to go there for your own safety due to the crowd inside the hotel,” said Salah. He also added that many celebrities came to see him in the room which caused him a disturbance.

Even during the mega event in Russia, a local football expert had criticised as a delegate of Egyptian celebrities appeared at the training ground. “The team’s stay must not turn into a village wedding ceremony. Shame on you! We are outraged!” he had said.

Salah a couple of days ago, tweeted to Egyptian Football Association for not responding to the messages sent by his lawyer. He took to Twitter and wrote, “Naturally any ball union seeks to solve the problems of its players until they provide comfort.. But really what I see is exactly the opposite. It is not natural that my letters and my lawyer's letters are ignored... I don't know why this is all. Don't you have enough time to answer us?!”

Ramy Abbas Issa, Salah's representative, also took to social media and said, "We asked for guarantees regarding Mohamed’s wellbeing whilst with the national team, and assurances that the image rights violations wouldn’t happen again. That’s all. They have yet to respond."

(The above story first appeared on LatestLY on Aug 29, 2018 12:04 PM IST. For more news and updates on politics, world, sports, entertainment and lifestyle, log on to our website latestly.com).