Real Madrid vs PSG: Three Reasons Why This UCL 2021-22 Clash at Santiago Bernabeu Is an Absolute Must-Watch!

A huge game of football awaits fans at the Santiago Bernabeu when PSG and Real Madrid lock horns in the round of 16 tie in the Champions League. Read below to see why this clash cannot be missed by football fans! 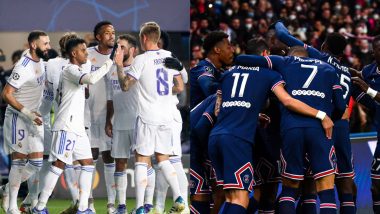 One of Champions League's most epic clashes would unravel at the Santiago Bernabeu on Thursday, March 10 when hosts Real Madrid take on PSG in a crucial round of 16 tie. Both these teams are favourites to win the title and this high-octane fixture would see one of them bow out of the competition and while the other would keep harboring their hopes of a European championship this season. Karim Benzema, Neymar, Kylian Mbappe, Luka Modric, Lionel Messi--all of these players in one game! Real Madrid vs PSG: Brazilian Legend Roberto Carlos Poses With Internet Star Khaby Lame at Santiago Bernabeu Ahead of UCL 2021-22 Tie (See Pics)

This clash is indeed one of gigantic proportions with so many star players putting their best efforts into having their teams advance on to the quarterfinals. Here are three reasons why this match is an absolute must-watch!

1) Lionel Messi's Bernabeu return: The Argentine was the reason for Real Madrid's consistent nightmare when he plied his trade for Barcelona in La Liga. Now, all eyes would be on him to replicate that same form in this match. Real Madrid would be very wary of the threat that Messi would bring to the table and surely, would not take him lightly. After missing a penalty in the first leg, the PSG star would surely aim to make amends. Will Messi once again down the hopes of Real Madrid fans or would the Los Blancos have the last laugh this time? Real Madrid vs PSG, UEFA Champions League 2021-22 Live Streaming Online: Get Free Live Telecast of UCL Football Match in IST

2) Kylian Mbappe potentially playing in his future home ground? One of the underlying themes of this Real Madrid vs PSG clash is Kylian Mbappe. The Frenchman, according to various reports, has been heavily linked with a move to Real Madrid. The timing of this clash could not have been better as Mbappe's contract runs out at the end of the season and Real Madrid would, in all likelihood come looking for the forward should he decides against penning a new PSG deal. Mbappe could very well think of getting used to playing at the Bernabeu if the transfer eventually comes through and this match can be a preview to the home fans of what they can expect from the highly-rated youngster.

3) Clash of European titans: Real Madrid vs PSG is a clash between two of Europe's biggest clubs. Both have performed consistently at the top level for many years and apart from all the big names, this clash is set to be clash of equals, with both teams dominating their domestic leagues. PSG already have a 1-0 advantage but that is surely not enough to undermine a team like Real Madrid, who would go all out in securing the win.

Real Madrid vs PSG, Santiago Bernabeu. UEFA Champions League 2021-22 round of 16 knockout game--football nights hardly get bigger and better than this right?

(The above story first appeared on LatestLY on Mar 09, 2022 11:29 PM IST. For more news and updates on politics, world, sports, entertainment and lifestyle, log on to our website latestly.com).