Both these sides are desperately aiming to win this match after difficult outings in their domestic competitions. The teams look evenly matched and this contest just might turn out to be a thrilling one. Spurs are predictably going to win this match 2-1. Here are the live streaming details of the match. 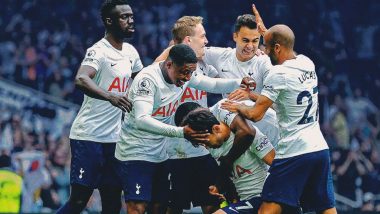 Tottenham Hotspur are all set to take on Rennes in an away clash in the UEFA Conference League 2021-22 on Thursday. The inaugural tournament is a brand new addition to European football and both Spurs and Rennes would have their sights set on having a good start. Both these sides are coming on the back of demoralising performances in their respective domestic leagues last weekend. While Spurs were left blanked 0-3 by Crystal Palace, Rennes were defeated by Reims in their last Ligue 1 2021-22 fixture. They are currently at the 11th spot in the table and haven't had a good start to life after letting go of one of their prized talents in Eduardo Camavinga. They would be seeking a fresh start to their 2021-22 season and this match in the Conference League can just be the platform for that. Spurs, contrastingly, have been good in the Premier League 2021-22 campaign but their last defeat to Palace in the weekend has given rise to a lot of questions, to which they would be seeking answers to, come Thursday. Club Brugge 1-1 PSG, UEFA Champions League 2021-22: Lionel Messi-Led Parisians Frustrated By Belgian Champions (Watch Goal Video Highlights)

Both the teams look evenly matched and this contest just might turn out to be a thrilling one. Spurs are predictably going to win this match 2-1. Here are the live streaming details of the match.

Rennes vs Tottenham Hotspur clash in the UEFA Conference League 2021-22  will be played at the Roazhon Park in Rennes, France, on September 16, 2021 (Thursday). The game has a scheduled time of 10:15 pm IST (Indian Standard Time).

Sony Pictures Network are the official broadcasters of UEFA Champions League 2021-22 in India and will telecast the games live on its channels. Fans can tune into Sony Ten 1 HD/SD channels to watch the live telecast of Rennes vs Tottenham Hotspur on TV.

Sony Pictures Network’s official OTT platform Sony Liv will be streaming the game live for its fans in India. You can tune into the Sony Liv app or website to watch Rennes vs Tottenham Hotspur, UEFA Champions League 2021-22 live streaming online. JioTV would also provide live streaming for this match.

(The above story first appeared on LatestLY on Sep 16, 2021 09:52 PM IST. For more news and updates on politics, world, sports, entertainment and lifestyle, log on to our website latestly.com).