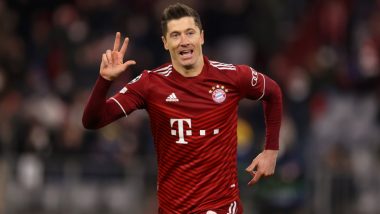 Berlin, April 19: Fundamental changes seem to lie ahead of 2020 treble winner Bayern Munich. While fans prepare for the German classico against Borussia Dortmund this Saturday and the 10th consecutive national title for the Bavarians in case of a home win, landslide changes seem in progress behind the scenes. Inside reports speak of Bayern refusing to offer a two-year extension including a salary rise and only talking about one year for the Polish star striker Robert Lewandowski.

The sports magazine Kicker spoke of Bayern considering selling the Pole for 40 million euros this summer. Lewandowski's current contract is expiring in 2023. But the changes seem to go far beyond the issue of the spearhead after a disappointing 2021/2022 season with only one title and painful exits in the Champions League quarter-finals and the German Cup. Controversial strategies have come to light as coach Julian Nagelsmann demanded a convincing plan to secure the club's future among the top four European clubs. "You shouldn't miss too many transfer windows. If you want to create a top product, you need top materials in your production process," the coach said. Liverpool 4-0 Manchester United, EPL 2021-22: Cristiano Ronaldo-Less Man Utd Handed Defeat (Watch Goal Video Highlights).

Nagelsmann increased the pressure on chairman Oliver Kahn and sporting director Hasan Salihamidzic to decide about the club's future goals. Bayern currently seem stuck in a factional dispute. Kahn, the former German goalkeeper, several times mentioned the club has to consider income losses due to the Covid-19 pandemic and the forward's age. In this context, Kahn excluded efforts to sign Dortmund striker Erling Haaland as Bayern can't afford the reported financial package. The Norwegian striker is said to join the Citizens. The deal is said to be worth 350 million euros.

While negotiations with the Bavarian icons Manuel Neuer and Thomas Muller seem on a good way, winger Serge Gnabry could follow Lewandowski as one of this summer's departures, reports Xinhua. Bayern refused to address the German international's demands for a salary raise. Influential midfielder Joshua Kimmich demanded to go for a successful restart next season as "to the exit of the Champions League and the Cup that early, is a big setback." While Kahn and Salihamidzic try to cool down fans' expectations, Nagelsmann spoke about a certain amount of financial risk that has to be considered to secure the club's international position. Inter Milan 3-0 AC Milan, Coppa Italia 2021-22: Inter Advances to Final (Watch Goal Video Highlights).

Reports speak of Bayern eying Noussair Mazraoui and Ryan Gravenberch from Ajax, while Nagelsmann is said to talk about Leipzig's midfielder and Austrian international Konrad Laimer. A Spanish media report talked of Barca talent Gavi on Bayern's list. No matter of how things develop, Kahn is facing the challenge to ease tensions between Salihamidzic and Nagelsmann.

(The above story first appeared on LatestLY on Apr 20, 2022 10:29 AM IST. For more news and updates on politics, world, sports, entertainment and lifestyle, log on to our website latestly.com).