Virat Kohli’s love for football is no secret. 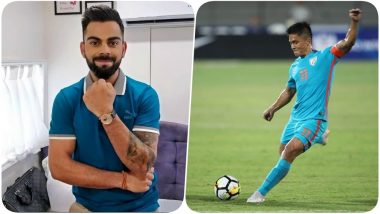 Virat Kohli’s love for football is no secret. The star cricketer not only co-owns a team FC Goa in the Indian Super League but also contributes to promoting the sport in India. A few days ago, when Indian football captain Sunil Chhetri had appealed to the fans to visit the stadium to promote the sport for the on-going Intercontinental Cup happening in Mumbai, Virat Kohli too joined the bandwagon.

Kohli also took to Twitter and asked the fans to support football. This obviously means that the Indian cricket star is keeping a tab on the performances of the footballers. Following a thumping 3-0 win over Kenya, Kohi took to Twitter and posted a message for the football captain. He wrote, “The last two years have been fantastic for @IndianFootball and last night again they showed that they mean business. A great 3 nil victory over Kenya. Well done champ @chetrisunil11," wrote Kohli.”

The last two years have been fantastic for @IndianFootball and last night again they showed that they mean business. A great 3 nil victory over Kenya. Well done champ @chetrisunil11!! 👏🙌#INDvKEN

Chhetri, in his 100th match, scored a couple of goals and the match turned out to be a sold-out event. However, the appeal made by the football captain didn’t go down well with the coach, Stephen Constantine. “I don’t feel we should be begging people to watch the national team. The response has been unbelievable. When the national team has been playing the manner we have been playing in the last three years it was disappointing to see the turnout in the first match,” he stated after the match, according to an AIFF press release. “I expect the stands to be full in the next two matches,” he added.

(The above story first appeared on LatestLY on Jun 06, 2018 09:24 AM IST. For more news and updates on politics, world, sports, entertainment and lifestyle, log on to our website latestly.com).