Manchester United young prospect Zidane Iqbal has signed a new contract with the club, keeping him at Old Trafford until at least 2025. 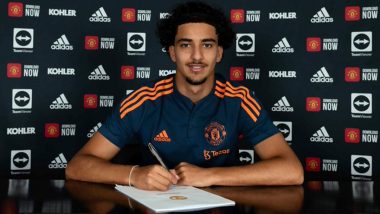 London, June 29 : Manchester United young prospect Zidane Iqbal has signed a new contract with the club, keeping him at Old Trafford until at least 2025. The 19-year-old has made just one first team appearance for Manchester United, but has done enough to secure a new deal with the club, which the United have the option to extend by a further year. Iqbal has joined the Academy at the age of nine and made his first-team debut in last December's Champions League match against Young Boys at Old Trafford. Manchester United Close To Signing Feyenoord Defender Tyrell Malacia: Report.

He has agreed a new deal that will keep him at United until at least June 2025, with the option to extend for a further year. The youngster has already played senior international football for Iraq, featuring in two World Cup qualifiers since accepting the call-up to represent the country of his mother's birth. The Whalley Range-born Academy graduate is a proud Mancunian of Pakistani and Iraqi heritage. Iqbal will be looking to hone his talents behind the scenes and maintain his development at the club in the coming months and years.

(The above story first appeared on LatestLY on Jun 29, 2022 06:43 PM IST. For more news and updates on politics, world, sports, entertainment and lifestyle, log on to our website latestly.com).