Formula 1: Confidence Is high; I Can Hold on to the Lead, Says Carlos Sainz After Taking First Pole Position in British GP

Carlos Sainz took lead by just 0.072 seconds ahead of Verstappen in the last lap, with his Ferrari teammate Charles Leclerc in third. teammate Leclerc was full of praise for the Spaniard, however, said he was targeting a Ferrari one-two on Sunday. 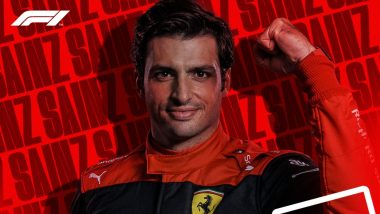 Silverstone, July 3:  Ferrari's Carlos Sainz was understandably delighted to take his first ever Formula One pole position, while admitting that he hadn't expected to take P1 for the 2022 British Grand Prix here on Saturday. Sainz took lead by just 0.072 seconds ahead of Verstappen in the last lap, with his Ferrari teammate Charles Leclerc in third. Teammate Leclerc was full of praise for the Spaniard, however, said he was targeting a Ferrari one-two on Sunday.  Formula 1: Carlos Sainz Pips Max Verstappen to Take Maiden Pole in Wet British Grand Prix

"Obviously an emotional first pole position, it's always special, no? Especially to do it at Silverstone in the wet, it just feels very, very good," Sainz was quoted as saying by Formula One.

"Confidence is high. I can hold on to the lead and try to do my own race, pushing from the beginning," he added.

"Towards the end I decided to push for a couple of laps and put a decent lap on the board that didn't feel amazing but it turned out to be pole position, so, good Pole position, it came as a bit of a surprise," he said.

"I didn't know what lap time I had to do on that lap to go pole. I was convinced that maybe it was not going to be enough. Then it turned out to be enough and I was pretty happy to hear that - but that's what I meant by 'the lap wasn't perfect', but in the end in these conditions a lot of the time, it's about putting it together and putting a decent lap on the board; not the most optimal, perfect lap of your life."

Sainz will therefore lead off the grid for the first time in his F1 career - and now he wants to turn that into a maiden victory. "Leading a formation lap will feel great in a Ferrari, I guess, and the first time I will do it. I think I haven't forgot since I led a formation lap in World Series by Renault. I think I've led a couple of races in Formula 1, I think it was at Portimao, and it felt great. That's the target, to do it again.

Teammate Leclerc qualified third and is third in the championship, 46 points behind Verstappen. He heaped praise upon Sainz - and said it's "most important" for the Ferraris to deliver a one-two, which would be their first victory since Round 3 in Australia.

"I'm happy for Carlos; he did a great job today. I spun in that last lap, I knew it was the lap where I had to put everything together and I didn't as a driver, so I didn't deserve to be on pole," said Leclerc.

"I think, of course, I would be very happy if Carlos wins the race tomorrow, then I'm not going to hide that I want to win too. But I think what is most important is that we finish one-two whatever way round it is. And if we can play strategic moves around the cars I'm pretty sure we will. So, let's see how it goes tomorrow, but again, I felt confident with the car so let's wait and see."

(The above story first appeared on LatestLY on Jul 03, 2022 02:07 PM IST. For more news and updates on politics, world, sports, entertainment and lifestyle, log on to our website latestly.com).