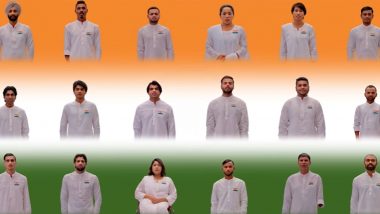 Mumbai, Jan 26: India's champion athletes who stole the show for the country at the Tokyo Games 2020 have come together on one platform once again. Only this time it is in a different avatar to recite India's national anthem. This has been made possible thanks to former India cricketer Nilesh Kulkarni, Founder Director at the International Institute of Sports Management (IISM), the country's leading sports management college, along with his team through a concept called The Sports Heroes, which celebrates India's sporting heroes. Neeraj Chopra Elated After Being Awarded Padma Shri and Param Vishisht Seva Medal, Javelin Thrower Promises to Continue His Hardwork for the Nation (Watch Video)

Featuring in the video, released on Monday, via social media channels, are 18 of India's medalists at the Tokyo Games both Olympics and Paralympics.

'Jana Gana Mana' was formally adopted as the National Anthem of India on January 24, 1950. Keeping in mind the importance of this day, the video will hence be unveiled on January 24, 2022 "Keeping in mind the stupendous success achieved by Indian sportspersons at last year's Tokyo Olympics and Paralympics, and this year's Azadi Ka Amrit Mahotsav, IISM has directed and produced the National Anthem which has brought all these athletes together for the first time."

"The objective this time as well remains the same: To inspire both the people of India and fellow sportspersons to take up Sports and dedicatedly desire to achieve success in this field," said Kulkarni about the concept.

(The above story first appeared on LatestLY on Jan 26, 2022 09:58 AM IST. For more news and updates on politics, world, sports, entertainment and lifestyle, log on to our website latestly.com).