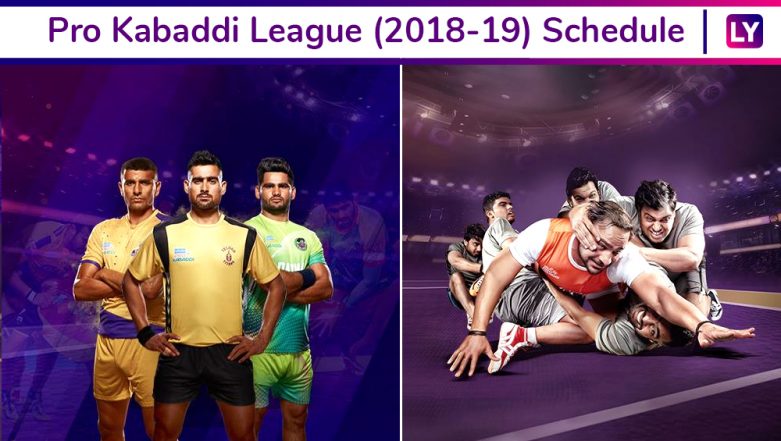 The sixth season of VIVO Pro Kabaddi League (PKL) started on October 5. Amidst all the football and cricket action that is taking across the globe, the commencement of PKL comes as good news for the sport’s fans. If you are looking for the fixtures of VIVO PKL 2018-19, then you can find the relevant information about the schedule, match dates, timings, and venues of the much-loved Kabaddi league here. You can save this page as PDF and can keep the timetable handy for future use. PKL 6 Complete Players List: Full Squads of All Pro Kabaddi League 2018 Teams.

One of the most watched sports on TV in India, after Cricket, Kabaddi has come a long way since its inception in 2014. Patna Pirates are the defending champions and will be clashing against Tamil Thalaivas in PKL 2018-19 season opener. Patna Pirates is also the team which has the most number of titles, i.e. in PKL history. Pro Kabaddi League Auction Updates: Category B Raider Prashant Kumar Rai Snapped by UP Yoddha for Rs 79 Lakhs.

The final of the Pro Kabaddi League will be played on January 6, 2019. Here we look at the fixtures of the PKL 2018-19 Playoffs Round.

Patna Pirates has been the champion for last three PKL seasons (2016-January, 2016-June, and 2017) and it will be interesting to see if they continue their dominance in this season. Stay tuned with us for all the latest updates about VIVO Pro Kabaddi League (PKL) 2018-19!