Kochi Blue Spikers vs Calicut Heroes, Pro Volleyball League 2019 Live Streaming and Telecast Details: When and Where to Watch PVL Match Online on SonyLIV and TV? 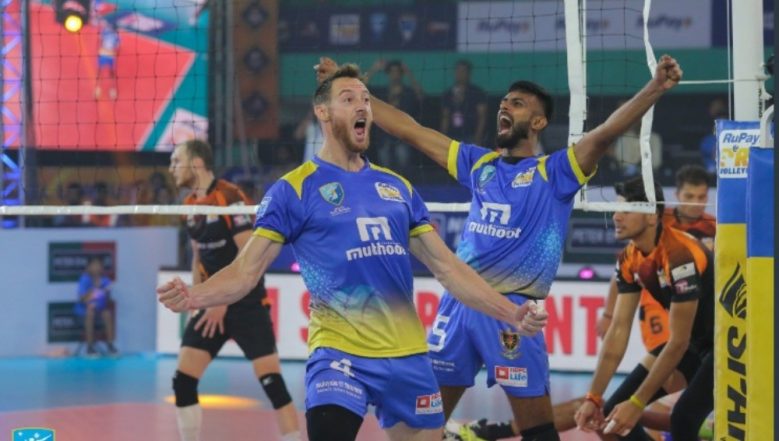 Kochi Blue Spikers are turning out to be the team to beat in the 2019 Pro Volleyball League. Playing in front of cheering home fans, the boys from Kochi have registered three wins out of the three so far. The way they dominate over their opposition has been the hallmark of the season so far and although it is still early days, they do look champion material. Up next for them is the second placed Calicut Heroes who are also yet to lose in the league but have played a game less than their opponents.  Pro Volleyball League 2019 Schedule With Match Timings.

David Lee has bagged 31 points so far for and the blocker is an asset to the Kochi Blue Spikers. His defensive shield has rarely been penetrated and Calicut Heroes will have to come up with something extraordinary to get past him. Speaking ahead of this massive derby fixture, Kochi skipper Mohan Ukkrapandian expressed his delight at playing such a high-intensity game and assured the fans his boys will give it all. Parabagaran S is the key in Kochi’s attack and he will need his team-mates to set him up in important positions.

Calicut will be pinning their hopes on Ajith Lal C who has won a massive 32 points in only two games for his team. He is equally supported by Paul Lotman and Jeetu in attack and the trio can put Kochi in a spot of bother. Jerome Vinith their captain is a dominating force and can take up several positions for them.

It is a tough game to call and either side will be equally confident of getting a win. It will not be a surprise if the game is decided in the final set.