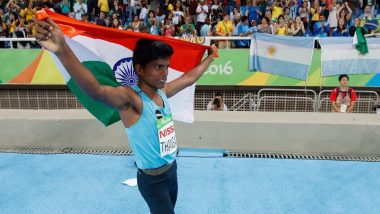 Indian Paralympic athlete Mariyappan Thangavelu will celebrate his 25th birthday today (June 28, 2020). Thangavelu represented India at the 2016 Summer Paralympic Games in Rio and won a gold medal in the men’s high jump T-42 category. With this win, he became India first gold medalist at the Paralympic games since 2004. So as Thangavelu turns 25, we take a look at some lesser-known facts about him.

Born in Periavadagampatti village in Salem district of Tamil Nadu, Mariyappan is one of six children (four brothers and a sister). He was interested in sport from a very young age and he first took part in a competitive event at the age of 14, where he finished second. Mariyappan currently trains under Mr.Satyanarayana, who took him under his wings after watching the Tamil-Badu born athlete’s performance at the 2013 Indian national para-athletics championships.

(The above story first appeared on LatestLY on Jun 28, 2020 08:30 AM IST. For more news and updates on politics, world, sports, entertainment and lifestyle, log on to our website latestly.com).