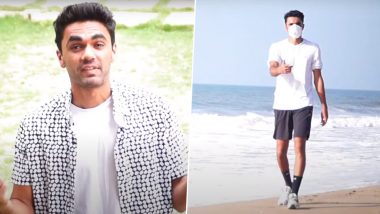 Owing to the COVID-19 crisis all over the world, India’s rising Tennis star Adil Kalyanpur released a rap song titled 'Mask On' which didn’t take in getting viral. The Bengaluru-based athlete created the song in order to inspire others to wear masks amid coronavirus pandemic. In the song, Adil says that the beating the virus is possible if people start taking proper precautions and safety measures. However, he also talked about the consequences the world will face if leniency is shown. The videos got a fantastic response from the netizens as people were in awe of the 20-year-old player’s talent. Bhuvan Bam's New Song Video 'Heer Ranjha' Gets Praises From His Fans.

A couple of years ago, Kalyanpur entered the top 1000 of the ATP men's singles rankings, achieving the 998th rank in September 2018. In recent times, however, the young athlete has been focusing more on his doubles career. In fact, earlier this year, Adil achieved a career-best doubles ranking of 591. However, with the sports activities in India being paused due to the global scare, the player came up with a different way of bagging attention. Meanwhile, let’s have a look at Kalyanpur’s inspiring rap song.

Notably, Adil Kalyanpur trained at the Rafa Nadal Academy in Mallorca for three years. He even had a session with the legendary French player Rafael Nadal. Well, these are still early days in Adil’s carer and he’ll aim to make a mark in the game.

Also, Kalyanpur’s parents are doctors. Hence, he must be well aware of the consequences of the rapidly-spreading virus. Speaking of his singing talent, Adil said: "So, I composed a rap, Captivity of Negativity, which reflects my own struggles of overcoming negativity in the field of tennis. I received a lot of positive feedback, and that marked the beginning of my Rap for Impact series."

Speaking of COVID-19 cases in India, over 13 lakh people have been tested positive for the virus with more than 3000 people losing their lives. Nevertheless, over 8 lakh people have recovered from the disease.

(The above story first appeared on LatestLY on Jul 24, 2020 12:57 PM IST. For more news and updates on politics, world, sports, entertainment and lifestyle, log on to our website latestly.com).