Limardo has struggled to make a living during the COVID-19 pandemic and has been forced to deliver food orders to make ends meet. Limardo was the first fencer from Latin America since Cuba’s Ramon Fonst in 1904 to win Olympic gold in Fencing. He achieved the feat at 2012 Olympics becoming the first Venezuelan in 44 years to win Olympic gold. 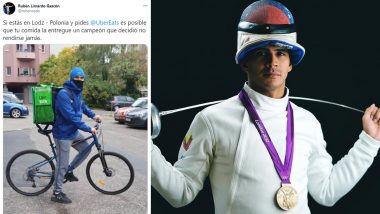 Olympics gold medallist in Fencing, Ruben Limardo will once again aim for glory at the Tokyo Olympics next year. But for now, the Venezuelan fencing Olympic champion is making his ends meet delivering Uber Eats in Poland. The 35-year-old has struggled to make a living during the COVID-19 pandemic and has been forced to deliver food orders to make ends meet. Limardo was the first fencer from Latin America since Cuba’s Ramon Fonst in 1904 to win an individual Olympic gold in Fencing. He achieved the feat at the 2012 London Olympics becoming the first Venezuelan to win an Olympic gold medal in 44 years. Justin Langer Wrote Letter to Sir Don Bradman Seeking Advice for Success & Still Treasures the Reply He Got!

The coronavirus pandemic has, however, changed his life drastically. Recently, on November 9, the fencer took to Twitter to narrate his ordeal and revealed he has been working as a food delivery man for Uber Eats to meet his ends and also train for the Tokyo Olympics. You have to earn your way and this is a job like any other," the 35-year-old told AFP while also explaining his day amidst the global pandemic. Take a look at his tweets where he narrates his plight. Bangladeshi Man Arrested for Giving Death Threat to Cricketer Shakib Al Hasan for Inaugurating Kali Puja Pandal in Kolkata

Limardo though isn’t the only one. The 35-year-old has been staying in Poland for the last 19 years. He is, however, one of the 20 members of Venezuela’s national fencing team who earn their living working as a food delivery boy in the Lodz town of Poland.

"We get very little money from Venezuela because of the crisis there. And the pandemic has turned everything around. There are no competitions, the Tokyo Olympics were delayed for a year and the sponsors are saying they will start paying again in the new year,” he said. Limardo along with the others travels around 50 kilometres every day and earns for around 100 euros per week to make a living.

"It allows us to live, finish our studies. We help each other out with training, paying rents. Everyone works to finance the others in the group," he said.

(The above story first appeared on LatestLY on Nov 18, 2020 03:49 PM IST. For more news and updates on politics, world, sports, entertainment and lifestyle, log on to our website latestly.com).