Former Australian opener Justin Langer revealed a letter he wrote to Bradman after making Test debut in 1993. While gearing up for Australia’s tour of Pakistan and Sri Lanka, Langer – who was still new to international cricket – asked Don for some tips for achieving his goal. 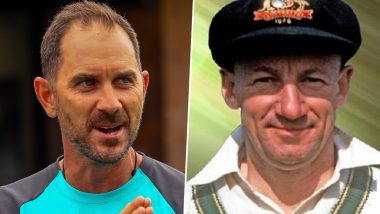 Sir Don Bradman is indeed one of the greatest batsmen to have graced the game of cricket, and his Test record is nothing short of jaw-dropping. In an era known to be dominated by the bowlers, the Aussie talisman scored runs at a staggering average of 99.94. Owing to the fact, many successful batsmen idolized Bradman while growing up. Former Australian opener Justin Langer was also one of them as he recently revealed a letter he wrote to Bradman after making Test debut in 1993. While gearing up for Australia’s tour of Pakistan and Sri Lanka, Langer – who was still new to international cricket – asked Don for some tips for achieving his goal. India Tour of Australia 2020-21 Schedule, Free PDF Download.

“I feel a little bit shy about writing this letter, but I felt you may be able to offer me a little advice which may help me achieve my goal of becoming a very successful Test cricketer,” Langer wrote in the letter. Bradman, who was 86 at that time, took just a couple of days to respond as he wrote a letter back which Langer proudly put on his wall at home, and one that he looked at nearly every day. Sir Don Bradman 112th Birth Anniversary: Images and HD Wallpapers to Celebrate Life and Legacy of Australia Cricket Great!

“As well as giving me valuable technical advice, Sir Donald told me he always played to have fun because he loved cricket. His letter to me is a treasured memory on my study wall. I see it every day when I‘m at home,” Langer – who’s currently the head coach of the Australian team – said in a conversation with Cricket.com.au.

In his reply, Bradman – who passed away in 2001 – said that he was flattered by Langer’s suggestion that an ‘old octogenarian such as him’ could help the left-handed batsman. The cricketing genius asked Langer to read his book “The Art of Cricket” and watch a video that he had made about batting.

One of Bradman’s stand-out pieces of advice in the letter was his suggestion to live a clean-living and physically fit lifestyle. “My success in the game was more a matter of natural ability than anything else. I did not take any measures … other than live a normal and sensible non-smoking and non-drinking career,” he wrote.

Bradman also went on to write that his love for the game was the main reason behind his success. “I loved the game. It never became a boring pastime,” he wrote. The letter seemed to have helped Langer indeed as the southpaw finished his Test career with 7696 runs in 105 Test matches.

Meanwhile, the correspondence was released as part of a new book, Cricket – The Aussie Way! with Justin Langer, released on Wednesday and published on behalf of the Bradman Museum.

(The above story first appeared on LatestLY on Nov 18, 2020 12:39 PM IST. For more news and updates on politics, world, sports, entertainment and lifestyle, log on to our website latestly.com).