He does not like holding himself back by just focusing on one thing. He says having multiple interests is what helps keep him sharp during the long hours he puts in it at work. 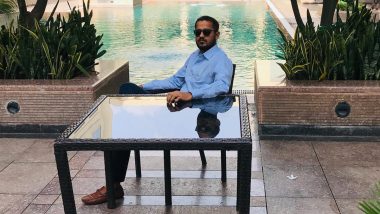 He does not like holding himself back by just focusing on one thing. He says having multiple interests is what helps keep him sharp during the long hours he puts in it at work.

Ever since his Rajasthan University days, Mr. Jat has been a film buff. And his favorite stars include the very successful Salman Khan whose success and extraordinary range inspires him to do better in his own life every day.

He had been brought up in Dubai, which as we all know, is a hub of many successful businesses, thus it comes as no surprise that the businessman lifestyle caught Mr. Jat's eye very early on in his life.

He says, the reason for his immensely successful business, and the reason why he has managed to become a self made millionaire, as he calls himself, at only 25 years of age is his immense passion for work. He loves working. Putting in effort in his own business is not a chore to him at all, he chose this lifestyle and he's happy in it.

Also, he constantly branches out of his comfort zone with every chance he gets. His aim is to do the absolute most he can, to make the world a better place for others.

The trick is to always stay one step ahead. He explores new ventures every day. He cares about his work and it shows in his success. Apart from being a successful business man at only 25, he is a man of various hobbies.

He says his immense love for watching cricket and his role model Virendra Sehwag, is what prompted him to be a cricket analyst in his free time.

One of the main reasons for his incredible rates of success is his smart decision making skills. When asked, he said his go-to strategy for a booming business is his ability to step back and patiently wait out the bad times, unlike many others who make hasty decisions   that negatively influence their businesses during difficult times.

His father is his mentor, his guide, and the person who taught has painstakingly taught him all about the inner workings of business.

And Mr.Jatt must have soaked up all his teachings by heart, for he is now one of the youngest people to own and single-handedly run such a successful business.

He says his work drive is what urges him to constantly do better in his life, and his struggles- that he has worked extremely hard to overcome- have made him what he is today - strong, hard working, passionate, and a man who believes in himself and his staff.

However, he does not intend to stop here, he aspires to work even harder, push himself even more to leave a mark upon this world. He is a firm believer of not being idle, instead he constantly tries bringing himself out of his comfort zone. With the help of his incredible staff, he works to be a real asset to the economy.

He is positive that nothing is as powerful a motivator as music, and the right music could really boost your mood up for a few extra hours of hustle. It is the hustle, that gets the results.

It is his ability to be sure footed and believe in his decisions, that has led him up the steep slope of success that many fail to climb. He is confident in his strengths and aware of his weaknesses, that he constantly works to eradicate.

Mr. Shera Jat is also a staunch believer of Hindutva and his message to all of us, who look up to him is that we should always be true to ourselves.

Apart from all of this, he enjoys travelling as a hobby. It breaks the monotony of work, and for Mr Jat, who stays holed up working for hours every day, it serves as a much needed break. For him, it is a time to just relax and enjoy himself before going back to work.