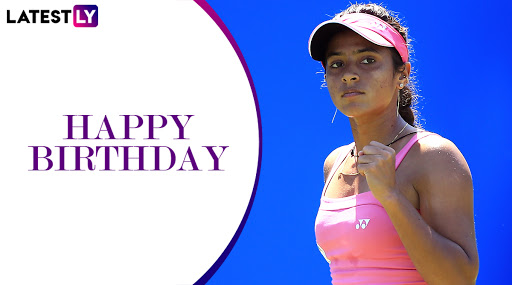 The current Indian No.1 in women’s singles and doubles Ankita Raina will celebrate her 27th birthday on Friday (January 11, 2019). Raina has a number of titles to her name in both categories as she has won a WTA Challenger tournament in doubles along with nine singles and fifteen doubles titles on the ITF Women’s circuit. She also won gold medals in the 2016 South Asian Games along with a bronze medal at the 2018 Asian Games. So on the occasion of the Indian tennis sensation’s birthday, we take a look at some facts about her. Australia Working on New Concept for Women’s Tennis After Scheduling Row.

Born in Gujarat to a Kashmiri Pandit family, Raina started her tennis career at the age of five and made her first professional appearance in 2009 at an ITF tournament in Mumbai. She came into the limelight during the 2017 Mumbai Open, where Raina advanced to the quarter-finals of the tournament. In April 2018, she won the $25K ITF title and achieved a career ranking of 181, becoming only the fifth Indian to break it into the top-200 of the ladies singles rankings, following the likes of Nirupama Sanjeev, Sania Mirza, Sunitha Rao, and Shikha Uberoi to join an elite list of players. Raina also made history at the 2018 Asian Games as she became only the second player representing India to win a medal in the singles competition at the Asian Games.

Some Facts About Ankita Raina

The tennis star had a great 2019 as at the Kunming open she defeated Samantha Stosur, former US Open champion, thus scoring the biggest win of her career. In October she entered the top 150 doubles ranking, after reaching the finals of 2019 Suzhou Ladies Open. Raina will be hoping to make her 2020 even better as she is in the quarterfinals of ITF Australia 01A tournament and will be looking to go all the way.