World No.2 seed Poland's Iga Swiatek advanced to the Miami Open semifinals after defeating Petra Kvitova 6-3, 6-3 in the quarterfinals on Wednesday (IST). 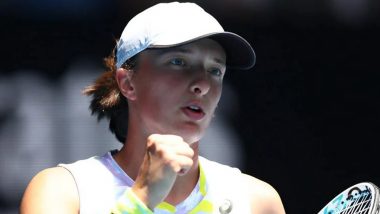 The 20-year-old is into her tour-leading fifth semifinal of the season and third straight at the WTA 1000 level. Swiatek joins Caroline Wozniacki, Victoria Azarenka, and Jelena Ostapenko as the only players to have made four or more WTA 1000 semifinals before their 21st birthdays. The Polish star, who is set to rise to World No.1 after Miami, will face 16th seed Jessica Pegula on Friday night for a spot in her third consecutive WTA 1000 final. Kim Sharma Celebrates One Year of Togetherness With Beau Leander Paes, Says ‘Thank You for Being Mine’ (View Pics and Videos).

Swiatek's run to her first Miami semifinal has been nothing short of dominant. Coming off her back-to-back titles in Doha and Indian Wells, Swiatek has lost a total of 15 games over four matches and has not dropped more than three games in a set in Miami. Her victory over No.28 seed Czech Kvitova was her tour-leading 24th of the season (24-3). "I want to use the confidence that I have built since the beginning of Doha. I think I'm on a roll and I want to use that. Having that kind of streak got pretty tricky, but I'm pretty glad that I could play well, that I'm healthy, and that I can compete against players like Petra. She's a legend," Swiatek said.

In the first meeting between the pair, Swiatek absorbed Kvitova's baseline power game while proving herself to be unbreakable on the night. After a strong start to the match, it took just one poor service game from Kvitova to give Swiatek all she needed to pocket the opening set. Kvitova hit 11 winners to 7 unforced errors compared to Swiatek's 6 winners and 3 unforced errors in the first set. Iga Swiatek To Be New World Number One in WTA Rankings, Will Become First-Ever Polish Singles Player To Achieve Feat.

Swiatek continued to pressure Kvitova's serve through the second set. The Czech buckled down to save four break points to hold 2-1. Swiatek went on to grab a third and final break after 1 hour and 17 minutes to seal her eighth consecutive win over a left-handed opponent.

"From the beginning, I knew that I had to keep up with the pace because she plays really fast," Swiatek said. "I wanted to stay low on my legs and the first serve was the key. I don't know if I had many winners, but I wanted to build up positive energy from her mistakes. I'm glad that I stayed focused and I did the tactics from A to Z."

(The above story first appeared on LatestLY on Mar 31, 2022 11:31 AM IST. For more news and updates on politics, world, sports, entertainment and lifestyle, log on to our website latestly.com).