Naomi Osaka Upset for Being Criticised on Swimsuit Pictures, Says 'It's Creeping Me Out' 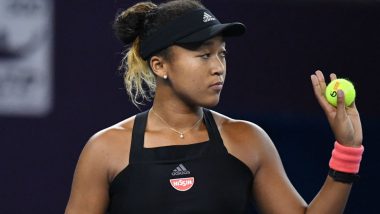 New Delhi, July 27: Rising tennis star Naomi Osaka has said that she is "creeped out" by fans who urge her to maintain her "innocent image" in apparent response to social media comments on her being pictured in swimwear.

"I just wanna say it's creeping me out how many people are commenting at me to maintain my "innocent image" and "don't try to be someone your not"," Osaka said in a tweet.

"You don't know me, I'm 22, I wear swimsuits to the pool. Why do you feel like you can comment on what I can wear?" she added.

I just wanna say it’s creeping me out how many people are commenting @ me to maintain my “innocent image” and “don’t try to be someone your not”. You don’t know me, I’m 22, I wear swimsuits to the pool. Why do you feel like you can comment on what I can wear?

This post from the Japanese came in response to comments from fans who critised her after she posted a series images of herself in swimwear and other modeling poses in recent weeks.

Welp mornin’ to you I guess ☀️

In May this year, Osaka had become the highest paid female athlete in the world, topping American great Serena Williams.

According to the Forbes magazine, Osaka had earned $37.4 million in the last 12 months from prize money and endorsements, $1.4 million more than Williams, setting an all-time earnings record for a female athlete in a single year. Maria Sharapova previously held the record with $29.7 million in 2015.

(The above story first appeared on LatestLY on Jul 27, 2020 11:06 AM IST. For more news and updates on politics, world, sports, entertainment and lifestyle, log on to our website latestly.com).