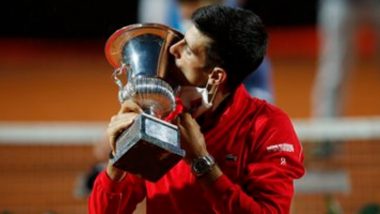 Entering the summit clash, Schwartzman, 28, was attempting to join 2016 champion Andy Murray and 2017 winner Alexander Zverev as only the third player outside of Djokovic and Nadal to win the title in Rome since 2005.

"It was a great week, a very challenging week. I don't think I played my best tennis throughout the entire week, but I think I found my best tennis when I needed it the most in the decisive moments today, yesterday (and in) practically every match," said Djokovic after the match as per the ATP Tour website.

"That definitely makes me very satisfied and proud that I managed to find that fifth gear when it was most needed. Turning to Paris, I couldn't ask for a better tournament here in Rome. Another big title and (I am) super pleased with it," he added.

The world number one has now won 31 of his 32 matches this year. He has won four trophies from five events in 2020, following title runs at the Australian Open, the Dubai Duty Free Tennis Championships and the Western & Southern Open.

(The above story first appeared on LatestLY on Sep 22, 2020 10:11 AM IST. For more news and updates on politics, world, sports, entertainment and lifestyle, log on to our website latestly.com).