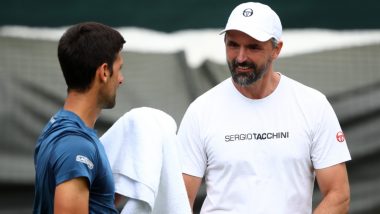 Novak Djokovic’s coach and former Wimbledon champion Goran Ivanisevic has tested positive for coronavirus. The Croatian was part of the recent Adria Tour exhibition tennis tournament in Croatia and Serbia where Djokovic, Grigor Dimitrov and two others contracted the virus. He confirmed the news of his positive result with a statement on Instagram. "I would like to inform everyone who has been in contact with me that I tested positive and ask them to take extra good care of themselves and their loved ones,” Ivanisevic wrote on his page. ITF Official Slams Novak Djokovic’s Father for Blaming Grigor Dimitrov After Coronavirus Outbreak at Adria Tour.

The Croatian great, whose only Grand Slam title win came at Wimbledon in 2001, revealed that he had undergone coronavirus tests in the last few days. But after two negative results in the last 10 days, he tested positive on Friday. “I will continue to self-isolate as I have been doing already,” he added in the statement. Novak Djokovic’s Video of Partying With Fellow Tennis Players Goes Viral After Grigor Dimitrov and Borna Coric Test COVID-19 Positive.

A post shared by Goran Ivanisevic (@goranivanisevicofficial) on Jun 26, 2020 at 3:43am PDT

Ivanisevic, who also revealed that he was asymptomatic, had attended the Adria tennis tour, a charity event organised by Djokovic and was played in Belgrade and Zadar. The four-leg series was called off prior to the final match of the third leg after Dimitrov tested positive. Subsequently, three more players, including Djokovic, confirmed that they had also contracted the virus. Croatia’s Borna Coric and Serbian Viktor Troicki were the other two players who tested positive at the tour.

(The above story first appeared on LatestLY on Jun 26, 2020 07:03 PM IST. For more news and updates on politics, world, sports, entertainment and lifestyle, log on to our website latestly.com).