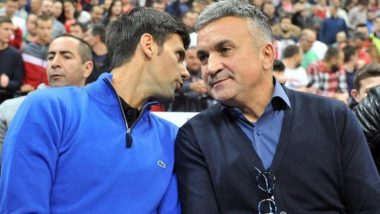 Novak Djokovic has been under severe scrutiny for organising the Adria Tour which has seen several tennis players along with him and his wife being tested for coronavirus. The Serbian stated that his intentions were pure the event didn’t follow the rules of social distancing which are a must during these times. Grigor Dimitrov was among the players who contracted the virus and Djokovic’s father, Srdjan, blamed him spreading COVID-19 into the tennis world. Novak Djokovic, Wife Jelena Test Positive for Coronavirus; Fourth Tennis Player to Contract Virus at Adria Tour.

The Bulgarian tennis star flew from the US was one of the very first players to be tested positive. While on the tour, players were seeing partying and there was no social distance protocol maintained between them which resulted in the spread of the contagious disease. Novak Djokovic’s Video of Partying With Fellow Tennis Players Goes Viral After Grigor Dimitrov and Borna Coric Test COVID-19 Positive.

The current world number 1’s father’s comment did not go down well in the tennis fraternity as the allegations were said to be ‘unjustified’ by Stefan Tzvetkov, president of the Sofia tournament in Bulgaria and a member of the ITF board.

‘For me, it is shameful. The Serbs are our brothers in the Balkans and our neighbours, but Srdjan Djokovic, once again, is sending the wrong message to the whole world and I will say that this is unjustifiable behaviour. I do not know all the facts of this case, but this must stop. Novak is a champion, but it appears that part of his entourage is not up to the standards of fair play, tennis culture, and ethics,’ said Tzvetkov to L’Equipe.

Several tennis players have also criticized Djokovic for his ‘irresponsible’ decision of hosting the event. ‘Boneheaded decision to go ahead with the ‘exhibition’ speedy recovery fellas, but that’s what happens when you disregard all protocols. This IS NOT A JOKE.’ Said Nick Kyrgios.

(The above story first appeared on LatestLY on Jun 26, 2020 10:38 AM IST. For more news and updates on politics, world, sports, entertainment and lifestyle, log on to our website latestly.com).