Tokyo Olympics 2020: Five Things You Need To Know About Miraitowa, the Official Mascot for Summer Games

Having mascots as faces of global competition helps not in just promotions, advertising and branding, but also in increasing the popularity of the local culture of the host nation. 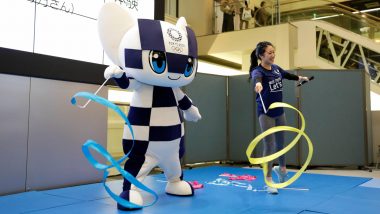 It is finally time for the Tokyo Olympics to take centre stage in the world of sports. After having been postponed last year, the much-awaited global phenomenon is set to kick start from July 23 and would be held till August 8. Athletes from all around the globe get an opportunity to come together in one common platform where they aim for greatness. Some achieve glorifying heights for their nations while those who fail, walk away with a promise to come back stronger. Mascots are one of the most popular things surrounding every major global tournament and the Olympics isn't an exception. From the 1932 Summer Games in Los Angeles, mascots have played not just their part in marketing and adding brand value to the competition, but also in promoting the cultural heritage of the host country. This year too, Tokyo Olympics 2020 also has its own mascot in Miraitowa. Here are five things you need to know about him: Ahead of Tokyo Olympics, AR Rahman Collaborates With Ananya Birla for Motivational Song

1) The origin: Miraitowa was created by artist Ryo Taniguchi, the design was selected after a competition where 2,042 designs were submitted for approval. The Tokyo Organising Committee reviewed the designs and picked three pairs for elementary Japanese students to pick the winner. The final decision was taken and the winner was announced on February 28, 2018. Taniguchi has been nicknamed 'Uncle Cinderella' by the Japanese media.

2) Something in the name: The name Miraitowa is a combination of Japanese words 'Mirai', meaning future and 'towa', meaning eternity. The name has been derived from a Japanese proverb which states, "learn from the past and develop new ideas."

4) Special powers: Miraitowa's special abilities include that of travelling between the real and digital world through the internet. He also has the power to teleport.

He then teleported to a city in old Tokyo known as Akasuka where it met with fans.

Mascots like Miraitowa would not only help in advertising for the Tokyo Olympics 2020 but also help fans remember the competition for a very long time.

(The above story first appeared on LatestLY on Jul 06, 2021 08:10 PM IST. For more news and updates on politics, world, sports, entertainment and lifestyle, log on to our website latestly.com).