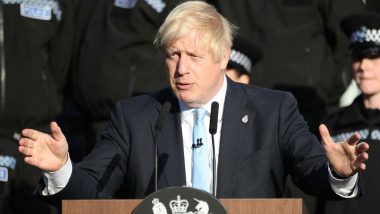 London, July 31: UK Prime Minister Boris Johnson has said spectators will not be allowed to attend sporting events from Saturday for two weeks in the wake of a spike in coronavirus cases in England. "With those numbers creeping up, our assessment is that we should squeeze that brake pedal... in order to keep the virus under control. "On Saturday August 1, you'll remember we had hoped to reopen a number of the higher-risk settings that had remained closed and today I'm saying we're postponing those changes for at least a fortnight," Boris Johnson was quoted as saying by Sky Sports.

"That means until August 15 at the earliest casinos, bowling alleys, skating rinks and the remaining close-contact services must remain closed. "Indoor performances will not resume, pilots of larger gatherings in sports venues and conference centres will not take place, and wedding receptions of up to 30 people will not be permitted," he added. Arsene Wenger Cautions Matches Without Spectators Will ‘Damage Football’ in Long Run, Empty Stadiums Only Short-Term Solution.

Meanwhile in Africa, it was announced that Zambia's football league will end prematurely next week due to a spike in COVID-19 cases, the country's football governing body said.

The league resumed on July 18 after having been abruptly closed in March following the outbreak of the COVID-19 pandemic in the country, reports Xinhua news agency. Football Association of Zambia (FAZ) spokesperson Sydney Mungala said the organisation has decided to end the league early due to concerns raised by health authorities, adding that a recent surge in cases has put a strain on the country's healthcare system.

(The above story first appeared on LatestLY on Jul 31, 2020 09:51 PM IST. For more news and updates on politics, world, sports, entertainment and lifestyle, log on to our website latestly.com).