Forward Vandana Katariya, Navneet Kaur and Sharmila Devi scored a brace of goals each as India thrashed Malaysia 9-0 in their opening match of the Women's Asia Cup hockey tournament here on Friday. 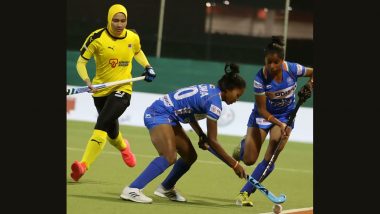 India, looking to win the tournament and grab a place in the World Cup to be held later in the year, came up with a dominant display and scored thrice in the first quarter and once in the second to go 4-0 up by half-time. They were more successful in the second half as the Id scored thrice in the third quarter and a goal towards the start and end of the fourth and final quarter to seal and comprehensive victory at the Sultan Qaboos Sports Complex here.

The Indians enjoyed total domination of their opponents and parked themselves in the opponent's half for most of the game. Malaysia did make a few attacks in the first half, skipper Savita was not troubled much by their forwards.

In has never lost to Malaysia in the last 17 matches and it did not look anytime on Friday that the record will be broken.

The Indians went into the lead early and kept the Malaysians under pressure throughout the match.

Though it was their first match of the tournament and comes after they had to pull midway through the Asian Champions Trophy couple of months ago, the Indian forwards showed good coordination and the midfield too kept them busy.

Overall it was a good performance and gives the team a boost ahead of the next match against Asian Games winner Japan on Sunday.

(The above story first appeared on LatestLY on Jan 22, 2022 10:08 AM IST. For more news and updates on politics, world, sports, entertainment and lifestyle, log on to our website latestly.com).