WWE fans must be pretty satisfied with what they are being offered these days, as there are unexpected return, unpredicted storyline and new champions being crowned. We just witnessed a high flying extravagant action from first-ever fatal-4 way iron man match at NXT Super Tuesday on September 1, 2020 for NXT title. 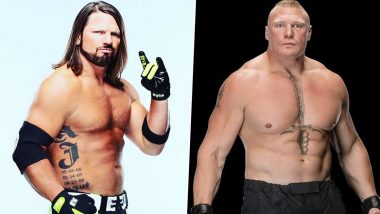 WWE fans must be pretty satisfied with what they are being offered these days, as there are unexpected return, unpredicted storyline and new champions being crowned. We just witnessed a high flying extravagant action from first-ever fatal-4 way iron man match at NXT Super Tuesday on September 1, 2020 for NXT title. This match ended with Adam Cole and Finn Balor ending with 2-2 draw. Before that at Payback 2020, we saw Roman Reigns being crowned as the new Universal Champion. Meanwhile, you have arrived at the right platform, if you are looking for top-five WWE news which includes AJ Styles revealing about testing COVID-19 positive to Brock Lesnar's future. WWE News: From Details About Roman Reigns Relationship With Paul Heyman to Reason Behind Bray Wyatt’s One-Week Long Universal Title Reign, Here Are Five Interesting Updates You Need to Know.

Former Intercontinental Champion AJ Styles recently revealed on Twitch stream that he got contracted with COVID-19 disease a month back. Styles made this statement after The Rock revealed recently that he and his family have tested positive for COVID-19. The wrestler revealed that he did not face much issue or complication after getting coronavirus, however, he wishes The Rock and his family a speedy recovery.

Former WWE wrestler Kevin Nash replied to The Rock's video saying that he and his wife are having coronavirus and his son is also asymptomatic. He further stated that he will pray that The Rock's family get well soon. The Rock in his latest video urged people to boost immunity as his family came in contact with COVID-19 disease.

Wrestling journalist Tom Colohue of Sportskeeda has reported that Brock Lesnar will likely return to WWE once the fan return to the arena. The Beast Incarnate is currently working as a free agent as his contract expired with WWE around June 2020.

4. Big E Reveals That 'The New Day' Was Buried

Big E recently while speaking on WWE Talking Smack revealed that 'The New Day' faction was buried. The wrestler added that the backstage management did not have confidence in this faction when it was formed. Former SmackDown Tag Team Champion also went on to reveal there were many people who said on their faces that 'The New Day; faction will not work.

As per Dave Meltzer latest report on Wrestling Observer Radio, WWE is planning to shift NXT show to Tuesday night to get more viewership. Vince McMahon and other board members chose NXT to be telecast on Wednesday, the same day when AEW episode takes place. The strategy was to run AEW out of business, however, that did not work and now for better viewership, NXT will telecast on Tuesday night. Stay tuned with LatestLY for more updates and news from WWE.

(The above story first appeared on LatestLY on Sep 04, 2020 09:01 AM IST. For more news and updates on politics, world, sports, entertainment and lifestyle, log on to our website latestly.com).