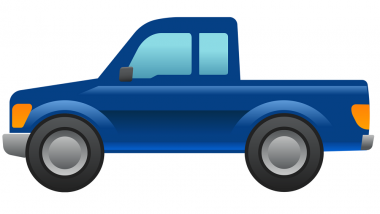 The F-Series line of pickup trucks from the American car maker are among the best selling vehicles in the US for a decade now. With so much of experience, it should definitely make Ford somewhat an expert in truck manufacturing business.

As a reminder, a proposal was submitted by the company in the year 2018 to the Unicode Consortium for a truck emoji. Moreover, Unicode Consortium is an organization that reviews as well as approves proposals for new emojis. The organisation has short-listed the truck emoji as a candidate for inclusion in a future version of Unicode. The final list of approved emojis is expected to be unveiled after early 2020.

He further mentioned that, “People want a truck emoji that’s fresh, stylish, carries their ideas, and ‘tows’ the line on what a truck means. The end result is a modern icon that should give all truck fans a smiley face emoji.”

(The above story first appeared on LatestLY on Jul 18, 2019 04:23 PM IST. For more news and updates on politics, world, sports, entertainment and lifestyle, log on to our website latestly.com).