The NFT Metaverse platform The Sandbox was covered last week for having bought a BAYC NFT for a record price of $2.42m, but it seems like Galaxy Fight Club could be a serious contender as a Metaverse platform. 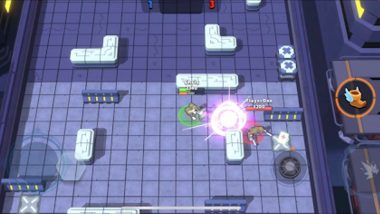 It’s hard keeping up to date with all the NFT projects on the market today with more than 20 launching every single day. With all the noise, one project that stands out is Galaxy Fight Club, they are not only a NFT collection but they are also creating a blockchain-based MOBA styled PvP game where avatars from all other collections can be a part of.

The NFT Metaverse platform The Sandbox was covered last week for having bought a BAYC NFT for a record price of $2.42m, but it seems like Galaxy Fight Club could be a serious contender as a Metaverse platform. The Metaverse is likely to be made up of a number of different platforms. In Ready Player One, which has been an inspiration for a Metaverse future for many projects, the player’s avatar can jump between many different planets and one of them being planet Doom where players can fight each other, Galaxy Fight Club seems to be well positioned to become the Planet Doom in our very own Metaverse.

Galaxy Fight Club launched their own collection of 9,994 fighters in mid-August, being one of the first projects to promise a dedicated game at the time alongside other leading gaming projects such as Rumble Kong League and Crypto Raiders, with many other projects following suit more recently. One month on it seems Galaxy Fight Club will be one of the first delivering on this promise, we have been given sneak peaks from their Closed Alpha playtest taking place this week and things seem to be going along well.

A huge 9.9E sale for an Exotic tier Gold Human with a battle axe weapon, congrats to the buyer! pic.twitter.com/v8iiuzS9w8

A different philosophy: ‘while everyone is busy shouting, we are heads down building’

Having spoken to the team behind Galaxy Fight Club, they mentioned they have a different philosophy when it comes to how they run their project. Ado, who worked as a senior business analyst in the traditional gaming industry previous to starting Galaxy Fight Club remarked ‘most projects in this space focus too much on short term marketing tactics, our strategy is simple -  while everyone is busy shouting we are heads down building, this is not to say marketing isn’t needed but a good product should be the foundation and I see too many projects marketing a poor product or even something that doesn’t even exist yet.‘

Based on the roadmap and timeline from Galaxy Fight Club’s website and whitepaper, the full game is expected to launch in November 2021 so it is still a very early stage for Galaxy Fight Club. Despite this and the lack of marketing, it seems the project has been growing organically quite well with a sale of over $35,000 USD last week for a Gold Human which is one of the stronger fighters in the game.